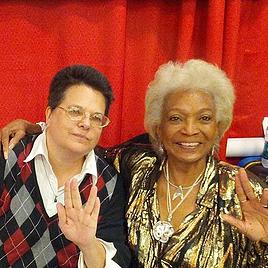 Leslie has worked in publishing for 33 years, as an agent, editor, and foreign rights director. She’s currently writing her second novel — due to her agent this summer — and running her own literary agency. Her first book was a children’s science book published in 2003-2004, Pacific Tree Frogs; her second was a Star Trek novel currently on submission.

Pacific Tree Frogs can be ordered through Tradewind Books in Vancouver, Canada, as I don’t think Amazon has any copies left. It’s an illustrated science book for kids, 5-10, and was a Top Ten in Canada in 2003.

1. What’s the weirdest thing you’ve ever researched for your works or biggest/most out-of-the-ordinary thing you’ve done while researching?

Of course, there I was, in hip boots with a net and a giant torch, in the middle of the bloody night, with my illustrator, standing knee deep in swamp and listening to the “reek, reek, reek” of the Pacific Tree frogs all around us, a barred owl calling in the distance, the mink and beavers splashing in the channels of the glacial lake up ahead, the squonk of a blue heron as we disturbed him…

Other than writing believable and memorable characters?

I’d like to be able to communicate with plants and animals, in the way the Transcendentalists thought we could.

And I’d like to teleport so I could warn the Vulcans to stay away, because JJ’s just going to blow them up.

3. Is there a certain type of scene that’s harder for you to write than others? How do you deal with this?

My Star Trek novel is the story of an adult survivor of child abuse who develops severe complex PTSD. It’s a psychological thriller, not your normal ST book at all. Most of the novel is set in sickbay and deals with the trauma and treatment of PTSD. The abuser, however, is still alive and well, and it becomes a race to see which one will survive — the victim or his abuser?

So at the end of the novel I’m well into real Star Trek territory, blowing up shuttlecraft and firing phasers, hand-to-hand combat and traveling at warp speed…Not only did I have to write completely plausible fight scenes to end the novel, but I also had to research all the Star Trek technology to get it right, since I hate making mistakes. Thankfully, I know a wonderful FX guy who has worked on Trek, and he supplied me with the science of comm. badges, etc.

It’s good. My characters are real. You’ve felt what they feel — you’ve been where they’ve been — you’re nodding your head as you read. I remember that, you think. You’ll fall in love.