One of my hobbies is genealogy. I love the research aspect of it – hunting for overlooked relatives with misspelled names on censuses, finding an elusive obituary with my mad Google skills, identifying a long-lost relative that cracks open a whole new branch.

More than that though, I love the stories that make my ancestors come alive. Unfortunately, all that’s usually passed down is names and dates, with nothing that makes someone a real living person.  But occasionally, you come across an old photo that gives you tons of details into the life of someone who died decades or centuries ago.

I’m lucky that my grandmother and great-grandmother both loved not only taking pictures of their daily lives, but scrapbooking as well.  I’m in possession of boxes of old photos that I’m slowly scanning to share with relatives scattered around the globe.

I recently scanned my grandmother’s wedding album, and tonight when she was over for dinner, I asked her to identify someone in one of the pictures. 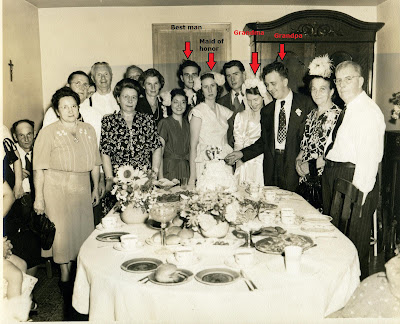 Rather than just confirm that the man hiding in the back row is indeed her stepfather, she told me about where the picture was taken (her mom’s dining room), details about the furniture (that cabinet is made with all pegs, no nails), and what the wedding party went on to do (marriage, dentistry).

She further explained that she and the maid of honor were best friends and frequently double-dated. The maid of honor didn’t like my future grandfather, and my grandmother didn’t like the maid of honor’s future husband (the best man in this wedding, who was good friends with my grandfather). So one night when the two guys asked the two girls out, my grandma and her friend blew them off instead. The young men wanted to know why, and the girls just said, “Eh.” This happened again the next week, so my grandpa asked my grandma to go skating with him, solo.  They were married six months later.

Looking at this picture, there are so many other stories (all true): a woman who left a man to marry his brother. Another woman who left her own husband to run off with an older married man and live under an alias while they traveled the country as truck drivers during the Depression. A bootlegger uncle. An arranged marriage. A mother who sent her young illegitimate son to live with family in America. An overly-protective mother who undermined her child’s marriage. A woman left widowed with 5 kids after her husband killed himself.

What can your old pictures tell you?