Day Z of the 2013 Blogging from A to Z April challenge. Today’s topic: zero-sum.

When I was a teacher, I tried to hammer into my kids’ minds that my classroom, and life in general, was not a zero-sum game.  If you’re not familiar with that concept, it means that for every winner there must be a loser. For every A there must be an F. For every millionaire there must be a homeless person.

Unfortunately, that attitude seems to be prevalent with writing. If you buy my book, you can’t buy someone else’s. And while there may be some truth in that – your disposable income probably isn’t unlimited – you can at least read my book as well as someone else’s. Being a fan of one person doesn’t preclude being a fan of another.

I’m fortunate in that I know a lot of writers who are super supportive of me, and of most writers they come across. While we’re all working towards that end goal of an agent, or a publisher, or sales of our self-published book, we can help other writers at the same time: sharing resources. Writing critiques and beta reading. Talking about what’s worked for us, and what hasn’t, and why.

Writers are all in this together. My classroom wasn’t a zero-sum game, and neither is gaining readers.

Day X of the 2013 Blogging from A to Z April challenge. Today’s topic: X-Men vs Justice League and Coke vs Pepsi.

Sometimes, based on nothing other than which one you encountered first, you have a strong preference for one group/item over another nearly-identical one.

Given the choice, I prefer

What nearly-identical groups/items do you prefer over another?

Day W of the 2013 Blogging from A to Z April challenge. Today’s topic: writing resources.

If you’re a writer, what resources do you find helpful?

Day U of the 2013 Blogging from A to Z April challenge. Today’s topic: ubiquity vs uniquity.

As writers, we often have to strike a balance between the two. We want our stories to be original, yet at the same time we want them to have a broad-enough appeal to be widely read. Stay true to what you want to write and have a small audience, or write what sells and (possibly) enjoy commercial success?

For me, I’d much rather go with uniquity than ubiquity.

And saying those words (ubiquity, uniquity, ubiquity, uniquity – try it; it’s fun!) reminds me of a poem by French poet Jean Cocteau (not to be confused with French oceanographer Jacque Cousteau).

(And in English – well, it doesn’t sound nearly as fun in English.)

Which word fits you better – ubiquity or uniquity – and why?

Day V of the 2013 Blogging from A to Z April challenge. Today’s topic: a van down by the river.

I love road trips.  Love love love love love them. My plan when I retire is to move into an RV and travel around the country, just me and whatever cat I have at the time.

Day T of the 2013 Blogging from A to Z April challenge. Today’s topic: “Tim and Sara,” my short story available on Kindle (and soon to be Nook, whenever I get to it). 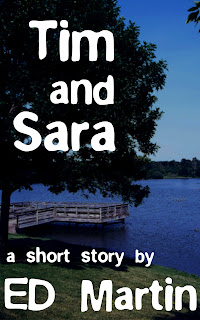 The victim of debilitating flashbacks, Tim is content to spend the rest of his life at Kirkbride, a state mental hospital. But his friend and fellow resident Sara is concerned that she has to save her soul before it’s too late, and so she devises a plan to break them out of the hospital. Can Tim help his friend while holding onto what’s left of his sanity?

Last summer I decided to try the ebook self-publishing route with one of my longer short stories, “Tim and Sara.” I put it on Amazon for $.99, gave it away for free for a few days, and sat back to watch the results.

What readers are saying:

“…a deep look into fragile minds, victims of sadness, coping as best they know how.”

“Her writing is clear and colorful, and Tim and Sara’s plight is immediately gripping.”

“…a fascinating look at a complex relationship and how we’re sometimes pulled into each other’s destinies.”

“Never guessed where this was going to take me. Surprises to the end.”

“Tim is a well-defined character, who will cast shadows in my mind for a long time.”

I’m really proud of how good the response has been, and it’s encouraged me to self-publish a couple short story collections, including the upcoming The Futility of Loving a Soldier, which should be out May 25th, and Between Light and Dark, hopefully out around Christmas (and containing a story about Sara and what drove her so “bat shit insane,” as Tim puts it).

If you haven’t read “Tim and Sara” yet, what are you waiting for?  For the price of a cheeseburger, you could read a story readers are raving about.

Day S of the 2013 Blogging from A to Z April challenge. Today’s topic: short stories.

I’ve been on a short stories kick recently.  Some good stuff I’ve read:

And I write short stories as well. I plan to release two collections in 2013: 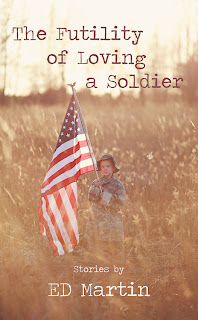 The Futility of Loving a Soldier should be out Memorial Day, assuming I finish the last couple stories that just this week decided they wanted to be included.

And I’m shooting for Christmas for a compilation tentatively titled Between Light and Dark, which will include 17 connected stories about the soul.

What are some of your favorite short stories?

Day R of the 2013 Blogging from A to Z April challenge. Today’s topic: road trips.

I’ve said several times on my blog, I love road trips.  There’s something about hopping in your car and just going somewhere, hours in the car listening to music and enjoying the scenery and thinking about stories or life or whatever, that I can’t get enough of.

Growing up, my family did road trip vacations.  When I was 6, we went to Mt. Rushmore and the Black Hills. The next year, we went to the Grand Canyon. This was before car DVD players, before Gameboys, and I can’t read in the car without getting sick, so my brother and I had to find ways to entertain ourselves: car bingo, Legos, the “I’m not touching you” game.

Last spring break I went on an epic road trip. Despite some family members’ misgivings, I drove 3000 miles in 8 days, by myself, following Hwy 61 along the Mississippi River. Down to St. Louis; Cairo, IL, and Memphis; a detour to my Lone Wolf MC’s hometown in the Mississippi Delta; Baton Rouge and finally New Orleans where I ate catfish that melted in my mouth. I then cut over, through my beautiful future retirement town of Pass Christian, MS, to Pensacola and an afternoon lying on the beach and photographing the waves and jetsam. Then up through Birmingham towards Chattanooga, veering towards Nashville; my college town and a long chat with a former professor; and finally back home.

It was wonderful. I got several new story ideas, including “Of Gods and Floods” which was published in Shadow Road Quarterly, and hashed out some novel plot points. I saw parts of the country I’d never been to before, and can now brag that I’ve driven the entire US length of Hwy 61.

Last summer, I made a few shorter trips north as well. Both involved a Great Lake, wandering around in beautiful scenery, and plenty of time to think in the car.

Of course, I can’t wait to go somewhere again.  Some of the bigger trips I have in mind:

What are some memorable road trips you’ve taken, or ones you’d like to take?

Day Q of the 2013 Blogging from A to Z April challenge. Today’s topic: quotations.

Today I give you some of my favorite quotations from books and TV and who knows where.  (Yeah, this is a cop-out. But it’s late and Q is a hard letter.)

“We are all born mad. Some remain so.” ― Samuel Beckett

“Love isn’t how you feel. It’s what you do.” ― Madeleine L’Engle, A Wind in the Door

“No doubt exists that all women are crazy; it’s only a question of degree.” – W. C. Fields

What are your favorite quotes?

Day P of the 2013 Blogging from A to Z April challenge. Today’s topic: pride.

When I taught high school English a few years ago, I found the kids learned best if the units revolved around a theme rather than just form or length, like non-fiction, poetry, short stories, etc.  And to that end, my whole sophomore world lit class focused on pride.

We started out our poetry unit with excerpts from The Inferno, talking about the layers of Hell in the context of the Seven Deadly Sins (yeah, I talked about religion in a public school; that’s actually okay as long as you don’t endorse one religion over another). And the kids came to the conclusion that pride was left out because Dante didn’t want to burn in hell too.

Next was a poem by Pierre de Ronsard:

When you are truly old, beside the evening candle,
Sitting by the fire, winding wool and spinning,
Murmuring my verses, you’ll marvel then, in saying,
‘Long ago, Ronsard sang me, when I was beautiful.’

There’ll be no serving-girl of yours, who hears it all,
Even if, tired from toil, she’s already drowsing,
Fails to rouse at the sound of my name’s echoing,
And blesses your name, then, with praise immortal.

I’ll be under the earth, a boneless phantom,
At rest in the myrtle groves of the dark kingdom:
You’ll be an old woman hunched over the fire,

Regretting my love for you, your fierce disdain,
So live, believe me: don’t wait for another day,
Gather them now the roses of life, and desire.

The kids took it to mean, “Hey, I loved you when you were hot. And now you’re old and ugly and just wish you could’ve hooked up with me when I was around, but now I’m dead and you’re old and ugly.” Which is definitely pride, the kids were quick to point out, especially in light of his picture.

And then we moved onto excerpts of Machiavelli’s The Prince, which I spun as a dictator’s handbook. It takes a lot of pride to see yourself as a worthy ruler when you’re a complete d-bag. From there we did a nonfiction unit on genocide around the world – Cambodia, Srebrenica, and Rwanda in addition to the Holocaust – and looked at interviews and biographies to try to figure out why ordinary people were so willing to kill their fellow citizens.

Plays gave us Bizet’s Carmen (yes, the opera; we read the words as a script), Goethe’s Faust, and Molière’s The Misanthrope; three plays that all revolve around pride.

As our novel we read Bulgakov’s Heart of a Dog, a wonderful story about forcing someone to become something they’re not and then punishing them when they don’t meet your expectations (read as satire of the Iraq War as well as the Bolshevik Revolution).

In all these works, we looked at not only what excessive pride moves people to do, but also what happens to them because of it.  And that’s something I bring into my own stories; how does excessive pride lead to a character’s downfall – or, more interestingly sometimes, the downfall of others?

What themes do you work into your stories? And which of the Seven Deadly Sins – Greed, Anger, Pride, Lust, Envy, Gluttony, Sloth – are you most guilty/fond of?