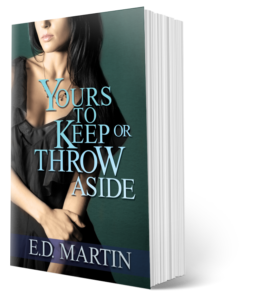 When her husband David’s infidelities are revealed, shattering the perfect life Kasey Sanford thought they’d created together, it’s a wake-up call that she’s lost herself along the way. She demands that David move with her to a new town, to a fresh start for their life together.

Kasey loves the freedom of reinventing herself, including her new friendship with police officer and soldier Andrew Adams. Andrew is handsome and charming, and his interest in Kasey awakens feelings she’d rather have for her husband, who pushes her further away with each of his alcohol-fueled outbursts. Intent on preserving her marriage for the sake of her young daughter, and with no one else to confide in, Kasey turns to Andrew for support.

But Andrew’s own life is falling apart as he’s put on standby for another deployment, triggering painful memories he’d rather ignore. He’ll do anything to forget the soldiers who didn’t return home with him, his stillborn son, and all those he’s disappointed, including God.

As their relationship grows, Kasey must decide if she will repair her marriage and remain with the man she’s always loved, or if she will give up everything she holds dear to save the soul of a man she barely knows, a man who fights her at every step, a man desperate to regain his faith in God, in humanity, and in himself.