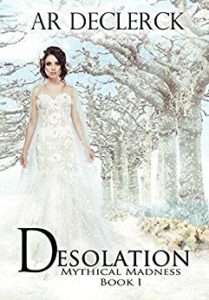 The music: “Dying” by Hole

What happens when you’re the goddess of love, but you just ain’t feelin’ it? Why, send a half-god werewolf to save you!

Desolation is more than that, though. It’s a paranormal romance (fantasy romance?) about Vinnie, the goddess of love whose job it is to help mortals fall in love. But years on the job have taken their toll, and she’s come down with desolation – a terminal illness that causes gods and goddesses to wither away. The catch here, however, is that if she dies, love dies too.

Her sister calls on the Fates’ assassin, Gage, to save her. But in doing so, he has to face an enemy and past he’d rather forget about – the king who made him the half-werewolf he is today.

Although DeClerck says she writes “adventure romance,” there’s more to this story than just sexy people falling for each other and fighting bad guys. She addresses sacrifice (for family, for duty, for love) as well as the fundamental nature of love – is it purely chemical/biological, and even if that’s just a component, what does that mean for a relationship? Is there even a relationship?

Overall, it’s a good story (although I personally would’ve cut out the last few pages to play up the themes I mention above, but I guess that’s why I don’t write romance!)

The accompanying song, “Dying,” fits with the scene I would’ve ended the book with – the idea that love (personified, in this case) is dying. And it’s gonna fight, but sometimes that’s not enough.

As a bonus, Desolation is currently free on Amazon this week! Make sure to grab a copy, and then let me know in the comments whether you agree with my song choice.