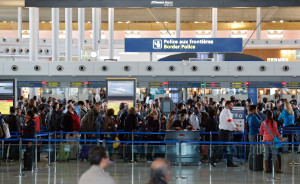 In this week’s scene, Daniel has arrived at the airport, leaving France to head back to America.

The train’s next stop is the airport. Daniel has made a full circle; he arrived in Paris alone, and he’ll leave from the same place alone once again. He tries to focus on the sterile architecture of the building, with its white walls and postmodern arches and walkways. The gray skies over the tarmac threaten rain as he waits in line for security. Again, he’s struck by the crazy urge to go back to Avignon, to find Mireille and tell her- Tell her what, exactly? She’s heard his apologies, and if they didn’t change her mind the first time, the tenth time, the fiftieth time, why would this time be any different?

He slips off his shoes, unbuckles his belt, and drops his backpack onto the conveyor belt. As the line inches closer to the body scanners, that urge grows stronger, but he ignores it as he places his hands above his head, then collects his belongings from the plastic bins.

Outside, the skies have opened up.