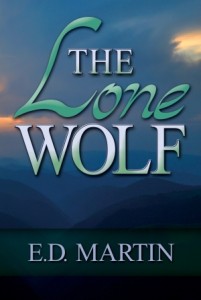 Spring break has begun! I still have to work, but a week off from classes will be nice – it’ll give me time to catch up on homework and writing. One of my current projects is plotting out the sequel to my debut novel, The Lone Wolf, which I’m excerpting this month.

In this scene, Kasey and her six-year-old daughter end up staying at Andrew’s apartment. He’s on the couch, while they take his bed. Kasey has just been awakened in the middle of the night by a noise coming from the living room and is going to investigate.

The sound came from a large, dark shape on the couch.

“Andrew?” I whispered, cautiously approaching him.

He lay on his side, facing me, eyes tightly closed, body tensed as he moaned, whimpered,
and shook his head.

I crouched down next to his head and gazed at his troubled features, fascinated by his
vulnerability, wondering what could disturb this man’s sleep so deeply, then without hesitation,
seemingly involuntarily, I lightly stroked his cheek, felt the sandpapered texture of a day’s
worth of stubble. As my fingers touched his skin, he sighed softly but didn’t wake. I left my
hand resting gently on his face, and the tension melted from his body, his features calming,
becoming more relaxed. It crossed my mind that I wouldn’t be able to explain this if he woke,
but I pushed the thought away.

Once he was breathing slowly and rhythmically, once I was certain the dream had passed, I
leaned forward and lightly kissed his sleeping lips, then stood and returned to bed.

You can get a copy of The Lone Wolf at Amazon and Barnes and Noble, or the audiobook at Amazon, Audible, or iTunes.