My dad has always tried to instill in me a love of music.

Since I’ve moved back to my hometown, I’ve become my dad’s concert buddy.  There’s a local place that hosts smaller rock and blues bands, plus a couple college towns within driving distance that have shows as well.

We caught a show this past weekend.  While I enjoyed the music, I was far more interested in the musicians themselves, and the crowd watching them. 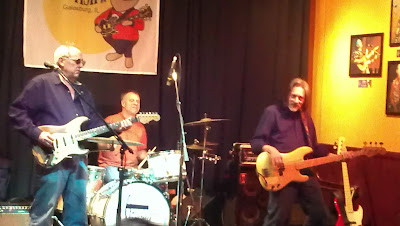 The band leader is the guy on the left. A seasoned guitarist, he didn’t care about the audience; he was just there to play music.  He barely talked to the crowd of about 50 or so, barely smiled; just stood there and played.

I took this picture with my phone, so the quality’s kinda bad, but you can kinda make out the scowl on the drummer’s face. He played pretty basic rhythm for the entire show, except when his bandmates ducked out for a smoke break and he got a solo.  He was great – animated, smiling, really showing off. He’s not happy about his (lack of a) role in the band.

And then there’s the bassist on the right, striking a Jesus/God’s gift to women pose. He played the crowd all night, with lots of hip-thrusting posturing.

And at least part of the crowd ate it up.  A group of middle-aged women in much younger clothes danced in front of the stage, and one woman in particular made eyes at the band the whole time.  After the show, before we left, I saw her chatting up the band, probably hoping to not go home alone.

I’ve noticed at these shows that I get a lot of story ideas. I keep a little notebook in my purse, and I’ll jot down notes, character sketches, even whole scenes. Now, I just need to find the time to finish all these stories.

If you’re a writer, what ordinary life activities inspire your stories?