I’m a bit behind on this.  I actually read these books in September and October, but then I took a temp job and just never got around to writing this post.  So, I’m going to cram five posts into the next few days, to get in all twelve entries for the year. 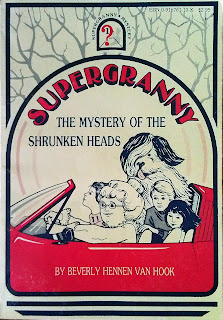 Supergranny is a crime-fighting old lady, assisted by three neighbor children.  In the seven-book series, she starts out combating property theft (shrunken heads stolen from a local museum, pigs from a local farm and a riverboat), then moves on to kidnapping and extortion.  The stakes aren’t super high or violent (pointed guns and getting tied up, mostly), making it perfect for elementary-aged kids.

Each book is about 100 pages, also great for the target demographic.  The writing is clear, the characters are quirky, and the plots are just absurd enough to be fun and plausible.  Although the technology is dated (the first book was written in 1985), the stories are still enjoyable today.

What I like most about these books is that the author is from my hometown.  When I was in third grade, my teacher took me to the David R. Collins Children’s Literature Festival, a day-long conference with workshops and talks by local authors and artists.  Beverly Hennen Van Hook was one of the speakers. 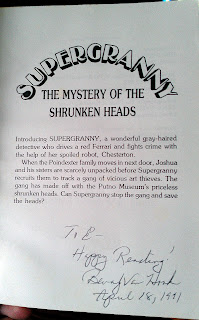 While I enjoyed her books and hearing her speak, the lasting thing I took from the conference was that she was a real live writer, a flesh-and-blood person who was able to attain her writing goals while living in the same town as me.  I’d already decided at that age I wanted to be a writer, like Laura Ingalls Wilder, but I didn’t know anyone who wrote; it was an elusive, mysterious profession where ideas became books on library shelves.

But after meeting Ms. Van Hook, the writing profession became that much more tangible to me.