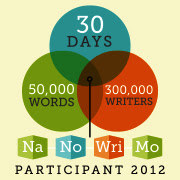 According to the website, there are six days until the start of National Novel Writing Month.

I was all set to work on the novel I’ve done the past two years, A Handful of Wishes.

It’s plotted.  I know the characters and the setting.  I could totally finish it this year (I’m about 13k into it, aiming for about 80k).

Instead, this weekend a scene came to me from the end of a novel I’ve been kicking around for a year or so.  I can see the characters clearly.  I know what they’re saying, what their motivation is, how the story ends and why.  And I know I have to write this scene, soon.

So I’m throwing out all my prep work and instead writing a steampunk novel.  I’ve read a couple steampunk books, enough to have a feel for the genre.  Kind of.  But that’s okay, because this novel is half in our world, half in its steampunk twin.

Here’s the description so far:

When Dennis Holmes’ girlfriend Mariella Happer, daughter of a powerful senator, goes missing, he discovers she’s been taken from his world to a parallel world as part of a political plot to gain control not only of his New York City but all New York Cities. Trapped in our world, Mariella inadvertently gains the help of bored, self-absorbed architect Eric Culver. Together the three must race against time to return Mariella where she belongs, or risk the destruction of all life as we know it.

It’s going to be action-y, with a political mystery and romance and all kinds of genre-bending, and a bit of influence from Neil Gaimon’s Neverwhere, at least initially as I write it.

I have six days to figure this bad boy out.  I predict I will crash and burn, fairly quickly.

Are you ready for this year’s NaNo?