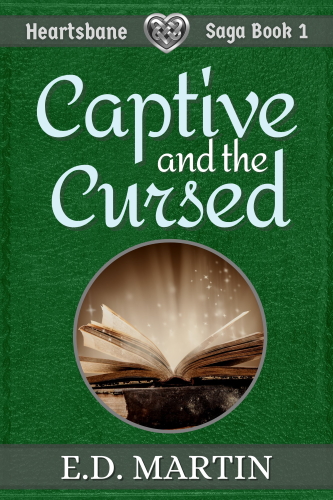 Beauty and the Beast - with Vikings!

Nyah's merchant father raised her and her younger sister Payton on tales of treasure and excitement, but after he returns home from his latest trip addle-minded, Nyah must put aside her dreams of adventure and focus on more practical matters, like her betrothal to the illiterate son of the village chief. But when a roving band of barbarians kidnap Payton and the village leaders do nothing to rescue her, Nyah has no choice but to take matters into her own hands. She offers herself in her sister's place, doomed to travel with the barbarian army until their price is paid.

The army is led by warrior Brandulfur, a man who suffers from a hideous, painful curse that's been put upon him and his court. Although he's officially in her country to aid his childhood friend in raising an army to support the king, he's on a personal quest for the book that holds the cure for his curse - a book that Nyah soon realizes her father stole from him.

Determined to return to her family, she'll need all the allies she can get. But she soon realizes no one is who they seem, including the people closest to her. She'll have to make hard choices if she wants her life to be the same as before - but is that even what she wants anymore?

Captive and the Cursed is the first book in a series of fairy tales retold in a world of Vikings. If you like sassy heroines, adventures spanning the medieval world, and a touch of romance, you'll love The Heartsbane Saga, E.D. Martin's new historical fantasy series. Get your copy and start your adventure today!