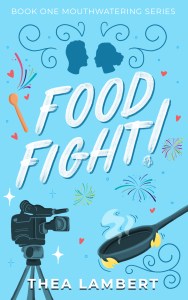 The media: “Why Are Cooking Shows?” by We’re in Hell

First off, a disclaimer: While I’ll read just about anything, there are a few genres I generally avoid: Omegaverse MMPreg. Cozy mysteries. Amish romances. And chick lit.

This week’s book is strongly in the chick lit category.

That said, I really enjoyed this book. It follows two contestants on a food truck reality show competition, who just happen to have a history together. The author does a great job of weaving together their past and their present, in a way that hints at what happened but drops in the flashbacks as the present story needs them, rather than all at once – or starting then and skipping to now.

The book also makes you hungry, as the author describes lots of mouth-watering dishes that the contestants make. Maybe she could do a spin-off cookbook too?

The only issue I had with this story was the ending, and I don’t want to give away spoilers (although it’s a romance so I’m guessing you can figure out the ending just by reading the blurb) – but if someone was a jerk to me, I’d hold that grudge forever. Case in point: I recently got called up for jury duty, and I was fully prepared to tell the courts that I would side with the defendant every freaking time if the officer involved was this guy who thought it was funny to call me Daria in 11th grade PE. It wasn’t funny. There were 500 kids at my high school, and maybe 30-40 in my PE class. He knew my name. He’s an asshole and 20 years later I still dislike him. (I got put on a grand jury, and none of the cases we heard were touched by Detective Dickhead. He lucked out this time.)

The media that accompanies this is a fun look at the history of TV cooking shows, starting with Julia Child and continuing through the macho boom (Anthony Bordain, Gordan Ramsey) through to reality shows we have gazillions of now. This video also speaks of the kinda exploitative nature of the shows, which Thea Lambert touches on in her book too.

Are you a fan of chick lit? Cooking shows? Cooking? Books about cooking? Share your thoughts below, and make sure to get a copy of Food Fight!