Happy Mother’s Day, Weekend Writing Warriors! I’ve been fortunate enough to spend the weekend with my son, hiking in a local nature preserve and then cooking. He’s inherited my love of the kitchen and made us chicken parmesan with triple chocolate mousse cake (and I’m very proud that I helped him and not the other way around). 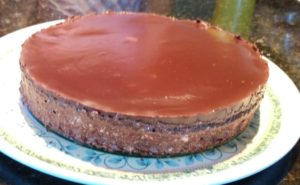 Since it’s Mother’s Day and my main character in the Heartsbane Saga is an orphan, I thought I’d switch things up and post a flash piece I wrote last year, titled “Motherhood.”

Abyzou tells herself she has no regrets. She loves her child and its father. She loves the life they’ve created together, so different from her past.

But outside the weather is changing. Calling to her. And inside, the baby’s cries cannot be consoled. For days now it’s had a slight fever and a new tooth and doesn’t want to be held or set down in its crib. Aby walks the house, bouncing the child in her tired arms, as she longingly glances out the windows at the changing leaves rustling in the cool fall breeze, until finally, finally, the baby falls into an exhausted sleep.

Gingerly she lays it down in the cradle that’s been in its father’s family for generations. She tiptoes to the window and opens it, then backs away, as the wind whips in, caressing her skin like a lover’s touch, murmuring sweet nothings in her ears.

And the rest, since it’s short:

She takes a small, tentative step towards the window, then another larger, more confident one, guided by the wind and the beckoning chill beyond the panes of glass. She opens the window wide, inviting in the wild night and all it brings with it, when the baby stirs.

She stops and looks in its crib. By some miracle the child is still asleep. Aby strokes its cheek, just as gently as the wind strokes hers. The baby reaches over and grabs her finger, grasping it firmly in its tiny hand, as a delicate smile graces its lips.

Aby looks at the window, at what she knows waits for her beyond the room’s feeble light, and then back down at her sleeping child. He sighs softly in his sleep, his grip on her never wavering.

Aby carefully scoops him up into her arms, his small warm body fitting perfectly against hers as she walks over and shuts the window.

I originally posted this on Medium. I usually post several short stories or microfiction pieces over there each month, so if you use that platform, hop on over and read some of my other stuff, clap, follow, all that good stuff. Thanks!