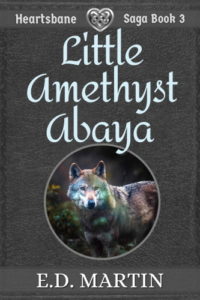 Another Sunday, another Weekend Writing Warriors blog hop, where a bunch of writers share 8-10 sentences from a current or recent WIP. This week I’m continuing to share from my upcoming-ish release, book 3 of my Heartsbane Saga: Little Amethyst Abaya, which is a retelling of Little Red Riding Hood set in a world of Vikings.

This snippet is from the opening prologue. Mihrimah is the daughter of the general in charge of a remote citadel. Her father and all the men garrisoned at the citadel were called back to the capital. She snuck out to say goodbye to her beloved as he was leaving, and on her way back was happened upon by one of the bandits currently terrorizing the countryside, who is trying to sweet talk her for information about the citadel’s defenses.

This excerpt skips just a bit from last week’s. They’ve reached the citadel, and the man has alerted his pack. (Note: Sidi is a term for “sir” or “mister.”)

Mihrimah shoved her companion inside the citadel, then pushed the door shut behind them. “Bar the door,” she told the frightened woman who’d let them in.

The woman did as she was told, her eyes alternating between the door and the wolf man, who was looking around the citadel.

The main door opened onto a small antechamber, with stairs leading up to the main living quarters and down to the stables, although they didn’t keep many horses and only enough goats and chickens to supply themselves with milk and eggs.

“Go upstairs,” Mihrimah told the serving woman. “Prepare a meal for our guest, and inform Grandmother that he’s here.”

The woman nodded and hurried away.

“What a beautiful home you have,” the man said as he approached Mihrimah.

She backed up, quickly hitting the stone wall behind her. “The better to welcome you, Sidi Wolf.”

He reached out a hand and again stroked her cheek. “What a beautiful smile you have.”

“The better to serve you with, Sidi Wolf.”

Outside, someone began banging on the door, and he was soon joined by many others.

The wolf man grinned at her. “It looks like my pack is ready to join us.”

Mihrimah unsheathed her short sword as the man tried to kiss her neck and brandished it in his face.

He laughed nervously. “What a beautiful little sword you have, my dear.”

“The better to kill you with,” she snarled, and plunged the blade into his stomach.