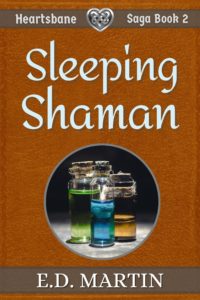 Ugh, COVID is not fun. I’m mostly recovered, except for the fatigue. Just walking up and down the steps in my house can wear me out by the end of the day. Which means, of course, more napping and less writing.

BUT I have a schedule to stick to! “The Brave Little Thrall,” which I’ve been posting from for the past month, should be up on Amazon by tonight, and book 2 in my Heartsbane Saga series, Sleeping Shaman, will hopefully be out December 1st! So, with that new release on the horizon, I’m switching to that story for the next few weeks.

Sleeping Shaman picks up where book 1, Captive and the Cursed, left off. MC Nyah, accompanied by her 15-year-old sister Payton and Payton’s sweetheart Dar, has left her village and gone to the capital city to find her fortune. Or so she thought.

This is from chapter 1. Prince Brandulfur escorted Nyah, Payton, and Dar to an inn, then gave them some money to get settled in before wishing them a nice life and taking his leave.

“Payton, you and I will take this one,” I said as I opened the door to one of the two rooms I’d rented for us. I pointed down the hallway. “Dar, you’ll sleep there.”

“Thank you, Bhantiarna,” he said as he opened his own door.

“You dinnae need to call me that. I’m not the tánaistae’s betrothed anymore.” Wynne, my former sweetheart, was the son of the toísech, the village leader, and I’d had a title as well. I’d been trying for months to get Dar to stop using it, but to no avail.

“Why can’t Dar and I share a room?” Payton asked, her fists on her hips.

I looked at her with a raised eyebrow.

“What? We shared a bed while you were traipsing around with the barbarians.”

Dar quickly slipped into his room and shut the door.

“You make it sound like I chose to join his army,” I said.

“But you did. You went there and told them you were joining them.”

“I only did it so that you wouldn’t have to!”

Payton threw up her hands. “I dinnae ask you to do that!”

“So I should have left you with them?”

“I dinnae know why you’re punishing me for what happened.”

“Not sharing a bed with Dar is not punishment.”

“Had you been able to control your…your…your feelings in the first place, you never would’ve been attacked by those barbarians and we’d still be safe at home in Orllewinol.”

“Is that what you’re punishing me for, then? I hate you sometimes, Nyah.” She strode into the room and slammed the door behind her.

“I hate you too sometimes,” I called through the shut door.

Her response was a loud thud as something, maybe her shoe, hit the door.

I sighed. Our new life in Eburwicke was not off to a good start.