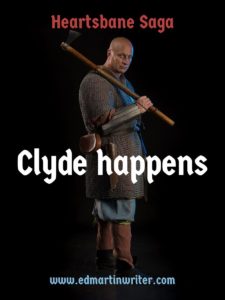 For the past year or so, most of my writing effort has been divided between short stories and The Heartsbane Saga, the new series I’m working on. I’ve been working on this series for years, actually, but it’s really gained its momentum over the last 12-15 months.

This series will be 7 novellas (so far, about 40-50k words each although I expect they’ll get longer as the series progresses) and 7 stand-alone-ish short stories, each of which is based on a different fairy tale.

Originally the series was just going to be one book, but then it morphed into 7. I had them all roughly plotted out. My writing group, Chicken Scratch QC, approved of the arc. I was all set.

I wrote book 1. So far, so good. I started on book 2. And that’s when things started to go off the rails (although in a good way, because the direction I’m going in has a lot more depth and excitement and twists to it). Specifically, Clyde happened.

Clyde is a character who wasn’t supposed to be a character, who’s kinda become a legend in my local writing groups as a way to express when things aren’t going the way you thought they would in your story. “Dammit, Clyde” is frequently heard at writing gatherings.

In book 2, my main group of characters travels to Aghlabid, a far away country, and they’re accompanied by a couple nameless huskarler (bodyguards). Or at least, they were supposed to be nameless. Our conversation went a bit like this:

Character A: We want names.

Character B: I’ll be Gunnar.

Character A: And I’m Clyde.

Me: WTF. Clyde? Clyde is not a Viking name. At least Gunnar is a traditional Icelandic/Viking name.

Clyde: Also, we’re going to be integral to the plot.

And Clyde’s been uncooperative ever since. I’ve had to redo my series outline at least three times now because of him, although again, each time the story’s become stronger and better for it.

But please, don’t tell Clyde that. 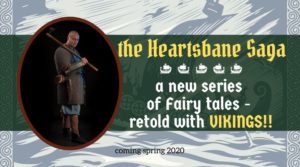 I’d originally planned to have the first book to my publisher earlier this spring, but due to changes to the series I’ve had to do some retconning (dammit, Clyde) and am now waiting until most of it is done before we release all the books a month or two apart, hopefully starting this spring. If you want to read sneak peaks, please head over to Patreon, where the first short story, “The Maiden in the Tower,” is posted as well as the first chapters of the books.