After her stick figure comic series “The Adventures of The Unstoppable” failed to garner any fans, Adelaide Thorne accepted that drawing would never be her superpower. She also accepted that she was not, after all, The Unstoppable. Twelve-year-old Adelaide never forgot the thrill of adventure, however, and the mystery of heroes, powers, and a bad guy who maybe is only bad because he feels stuck. Or maybe he’s just bad, and that’s interesting, too.

Adelaide’s writing has taken her around the worlds of her brain, and also around a lot of restaurants. After years of being the pickiest eater in the south, she somehow got a stint as a city blogger and food columnist, which taught her that people are too obsessed with queso and not excited enough about chicken noodle soup. She’s since said goodbye to journalistic writing and hello to creative writing, which is, after all, what she’s always done.

She currently lives in Florida, where she complains about the humidity but never makes any plans to move. Adelaide and her husband have two cats (only two), who are excellent sounding boards for ideas.

The Trace, the first book in her sci-fi, young adult Whitewashed trilogy, follows Ella Kepler, a nascent metahuman whose strength and speed is matched only by the enemies set against her. The Integer, the second book of the series, follows Ella as she unravels the truth about the Metahuman Training Academy and what binds her to it. 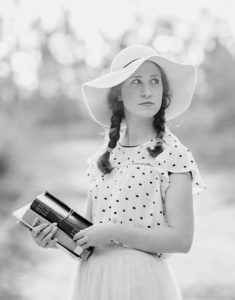 1. Where do your inspiration and ideas for your stories come from?

My head. :) I do daydream a lot. For instance, today I was thinking about what it would be like to find out that your real father was a serial killer. Creepy, eh? Sometimes, my ideas come from the bits of dream I remember, but often times they’re spontaneously generated.

2. What do you want your tombstone to say?

Sheesh, hadn’t ever thought about that. Probably “Totus tuus ego sum, et omnia mea tua sunt” which translates to “I am all yours, and all I have is yours.” That’ll be beneath “Wife & Mother.” I’m pretty boring. :)

3. What’s your current writing project and what are your writing plans for the near future?

I’m currently wrapping up my Whitewashed trilogy – or trying to! After I finish this trilogy, I have a few other bookish ideas. One delves into fantasy, which I’m excited to try out!

4. If you could have any superpower, what would it be and why?

You have no idea how often I think about this. It’d likely be flying. I’m kinda scared of heights, but I’d love to float above the earth and see things I’ve never seen before. Plus, it’d make traveling much more enjoyable.

5. Is there a certain type of scene that’s harder for you to write than others? How do you deal with this?

I’m not great at fighting scenes, because I like to be very specific and detailed, yet it’s really boring to read “He lifted his left hand thirty degrees, formed a fist, and knocked that fist directly into the right side of his opponent’s jaw…” My solution, odd as it may seem, is to act the scenes out with my husband (I promise no one gets hurt!). He’s trained in Wing Chun and always brings me back down to earth – ’cause I like to imagine the craziest, most unrealistic fighting scenes.

The Trace and The Integer are both currently available at Amazon.