Francis Sparks lives in Des Moines, Iowa, with his amazing wife Kelly. If he’s not working on his next novel or short story, you can find him teaching his children about dragons.

His debut novel, Made Safe, depicts the gritty underbelly of the American heartland. For Private Investigator Moses Winter, the job just got more complicated. His adultery case has taken a violent turn landing the subject of his investigation, Fred Dunsmore, in the hospital and Moses in jail. Moses is held for questioning along with his erratic client, Sharon Dunsmore, and Fred’s mistress, a Bosnian refugee who just happens to be related to the DCI agent investigating the case, Raif Rakić.

After Rakić secures their release, Fred goes missing, and Moses Winter finds himself compelled to find him. With the assistance of Rakic, Moses unravels Fred’s ties to Des Moines’s underworld and is forced to confront the most heinous crimes of his career. 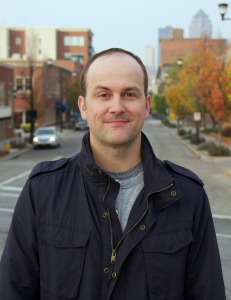 1. What was your attitude towards reading when you were a kid?

I was awful at doing assigned readings of the classics in high school but starting in fifth grade I had my nose in a book from then on. Mostly fantasy novels.

2. If you could pick just one book to read for the rest of your life, what would it be and why?

I would pick WAR AND PEACE. First of all I would finally have to finish it. Second I think it is such a massive work that I could read and re-read for many years and still find things that I’d missed.

You know, there are certain words that I can’t put into a sentence because I associate them so closely with a particular work almost like they’re an actor who’s been typecast. I will say I’m sure I overuse words that I’m not aware of but I’m not sure I have favorite words. I try to write original sentences as much as I can and avoid cliche.

4. Is there a certain type of scene that’s harder for you to write than others? How do you deal with this?

I think it can be difficult to write any scene where someone does something abhorrent or evil because I try to always come back to the axiom that this person doing this thing doesn’t see themselves as being evil. They are the hero of their own story. So how do you get inside their head and understand how they can justify to themselves what they are doing. I’m not sure I have a good way of dealing with it other than to keep trying to figure them out.

5. What’s your current writing project and what are your writing plans for the near future?

I fell into a project of a lifetime. A retired New Jersey detective contacted me last summer to help him tell the story of his lifelong pursuit of one of the most prolific cat burglars in history. We’ve been working on it since then and are now querying the proposal. I never thought I’d write nonfiction but it has been a great experience.

Made Safe is currently available on Amazon.