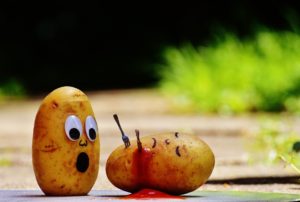 I’m working on a story that’s decided to set itself in Baltimore. I’ve never been to Baltimore, so in the interest of research I started watching The Wire. While my characters aren’t nearly as hardcore as those on the show, it’s been a great showcase of an often overlooked part of American life.

If you’ve never seen The Wire, it follows two storylines: that of a unit of the Baltimore PD trying to bring down a drug empire, and that of the leaders and minions of the empire. It’s a gritty show that doesn’t shy away from violence, and without giving any spoilers, it’s best not to become attached to any characters because no one is untouchable on this show.

I watched an interview with one of the creators, who talked about the decision to kill off a popular character in the third season. This character was a favorite, although he was also beyond reprehensible. The creator basically said that killing off the character was best for the story (which I agree with), and to keep him alive would be only to do so for the sake of the character, not the story.

I thought about that with my own stories. I’ve killed a lot of characters, some of whom readers wanted left alive because they liked the character, but as a writer I need to do what the story calls for. And sometimes that means killing off a character.

Readers, how do you feel when a character you like gets killed off?