Stephanie Villegas is an author and freelance writer living in sunny Southern California. She graduated with a degree in Religious Studies from UCSD, where she developed a deep interest in cultural beliefs and diversity in literature. Among many other obsessions, she can’t get enough of Film Noir, vigilante comic books, and mechanical typewriters.

In her latest short story, “The Secrets I Carry,” secrets are difficult for any eleven-year-old child to keep. But in Nazi Germany, Gertrude’s family secret is a matter of life and death. When she and her best friend stumble upon something unusual in the woods, their accidental involvement could mean danger for them both. Must she reveal one secret to keep another? Or is it one more secret for this young woman to carry? 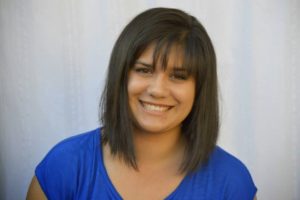 That’s a tough one. I’d much rather give a list than a single author, but if I had to choose, I’d probably say Gillian Flynn. She steps outside the box and has revitalized an interest in Noir (with the rise of so-called “Domestic Noir”). She took a male-dominated genre, dusted it off, and crafted something new out of it. All the while, her stories are full of micro-tension, a strong voice, complex characters, and plot twists. Too many writers are afraid to write a gritty woman and Flynn definitely delivers.

2. Thinking about the stuff you’ve written, who’s your favorite character and why?

So far, my favorite character is Roger from “Author of Death”, which I hope to release next year. He’s broody and cynical, but also a hopeless romantic. Writing in his voice has been a ton of fun, and it has taken me to darker places than I ever anticipated when I initially began the project.

3. What do you want your readers to take away from your works?

The first thing anyone should take away from my works is that being different (whether that is mental illness, a physical disability, or being introverted) is not shameful.

Beyond that, my readers should probably take away that often there isn’t a happy ending for everyone because characters, like all humans, have hopes and interests that are often at odds with one another. Mercy in the eyes of one character may be considered a lack of justice in the eyes of another. I don’t mean to say that an ending like Hamlet or Othello should be normative, just that there is more than one way to end a story and not every one needs a scenic ride into the sunset.

I am currently trying to finish my Thriller novel “Author of Death” about Roger, a 1950’s pulp-fiction writer turned stalker. Things get all kinds of tangled for him when an unstable ex-lover, the police, and an organized crime syndicate become involved. Suddenly, he’s the primary suspect for a crime he didn’t commit and his only alibi is the crime he did.

In addition to that, I’m working on a Science Fiction Young Adult novella (possibly a short series), which so far I’ve only referred to as “Vatos Versus Robots”. As you may have guessed, this one is very different than anything else I’ve ever written so its been a really fun challenge and learning experience. The part I’ve been working on is about Diego, former robotics engineer, who has returned to his home planet (Nuevo Juarez) following his father’s death. When his little brother is murdered by the local cartel’s robots, life for Diego’s family changes drastically.

5. What do you want your tombstone to say?

I’m quite sarcastic so, if I could have my say, I’d want something memorable like “It’s dark in here.” Of course, I’d always be open to something along the lines of “Feel free to sit and read with me.”

“The Secrets I Carry” is currently available on Amazon.