CJ Anderson is a teacher and author who has a slightly obsessed curiosity for the fantastical. When she isn’t assiduously performing these roles, switching back-and-forth whilst balanced precariously on the back of a Nimbus 2000, you can find her on alien worlds stalking hot demigods, nephilim, and elves from the cockpit of an X-wing. CJ and her husband, Superman, live northwest of District 12 with their superhero children and their cat-dragons.

Awakened, book 1 of her Gods and Guardians series, is non-stop action and romance with a syfy twist! Hair raising, skin prickling, and explainable is the only way to describe the connection Alaya and Dru experience when they first see each other. As Alayna is drawn into Dru’s world, she learns of the Guardians—others like her who have special abilities, whose genetics can be traced back to the Gods. . .except both the Gods and the Guardians are actually extraterrestrials, and . . . THEY AREN’T THE ONLY ONES WHO HAVE FOUND THEIR WAY TO EARTH. “Aliens? Yep, they exist. LOTS of them. Bad ones, good ones … I’ve now seen two bad ones up-close-and-personal; and as for the good ones, well, I’ve met three. No, wait – FOUR, if you count me, because I.AM.PART.FRAKKING.ALIEN!” 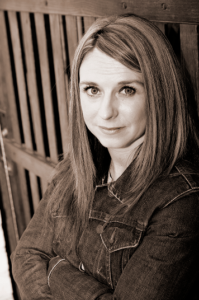 1. What genre do you currently read most and why?

I mostly read YA science fiction and fantasy. I love the not-everyday-life situations in this genre and the thought provoking concepts and possibilities that pop-up in these books. The books I read usually have a strong character as well and the plot is character driven. I’ve always found it easier to relate to characters in books than to real people. So, I suppose that in a way, I like reading these books because I get to hang out with my “best friends.”

2. Where do your inspiration and ideas for your stories come from?

I’ll just be going about my day and all of the sudden a “what if” question or idea will pop into my head. I also teach at the elementary level and often times my students will share their “what if” ideas. I don’t remember exactly when this particular insight occurred, but it was a merger of “what if instead of ‘science fiction becomes reality’, it is ‘reality becomes science fiction?’” I was teaching Greek Mythology at the time and I shared this idea with one of my 5th grade classes. This led to a whole conversation about the TV show “Ancient Aliens” currently on H2, which I had not yet seen. I started watching the series and my plot grew from there.

nyctophilia – (n.) love of darkness or night. Finding relaxation or comfort in the darkness.

I’ve always been a night owl and when I discovered the word nyctophilia I though, wow, that’s totally me!

I mean, this one is just fun to say!

4. What’s the weirdest thing you’ve ever researched for your works or biggest/most out-of-the-ordinary thing you’ve done while researching?

Well … I do write SciFi so I’ve researched some very bizarre things. To me, they are ordinary because I think about these types of things all the time, but I did feel a bit awkward researching Zero Point Energy (ZPE) and weapons. I mean, you never know who is out there watching your Google searches, and if they don’t know I’m an author …

5. What’s the worst job you’ve ever had and why? What was the best thing about that job and why?

Years and years ago I worked in a warehouse where returns were delivered from all the Walmart locations across the U.S. Being a creative, this was torture for me. Not to mention, much of the stuff was just thrown out. Not recycled, not repurposed, not sent back to the vendor. Because it was cheaper than any other option, perfectly good merchandise, trashed! if you were like 5 seconds late or had to leave for an emergency it was treated as like the worst thing in the world by management. One night, a lady who had been working in my department was having chest pains and was made to believe if she left for the hospital she would be fired. So, she stayed. When I came in to work the next afternoon, we all found out she had died! That was the absolute worst. The best thing about this job was the bull shit, (and I’ve had other similar jobs – but this was the worst). In all cases, the bull shit is what motivated me to keep trudging through life until I met my goals, first becoming a teacher and later a writer. Without all the BS I wouldn’t be the person I am today. I want to encourage my students and readers to think for themselves, to question everything, and above all things, always do the right thing EVEN if it breaks a rule!

Awakened is currently available through Amazon.