Michael Saad is a full time teacher who, when not lesson planning or marking, squeezes in fictional writing to keep him from hounding government officials on education, the economy, and the environment. He is happily married to his wife Jodi, and together they have two wonderful children. They reside in Alberta, Canada where Mike escapes to the Provincial Parks for seclusion from his frequent disillusionment with international politics. Mike’s works have appeared in several magazines. His novel, All the Devils Are Here, is on sale now and his newest novella, Let There Be Night, has just been released.

All the Devils Are Here is about two brothers who grew up in a household rife with drugs and violence. One brother escapes the cycle, the other doesn’t, but both are brought together later in life when each realizes their parents’ drug legacies don’t just end with time. 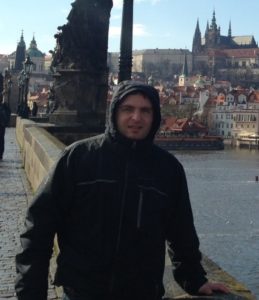 I would say Stephen King. I was reading Stephen King novels far younger than I perhaps should have. It didn’t warp me too much, but his work resonated with me, and still does to this day. If anything, I relate more to him today than I ever did. He was a former teacher, I am a current teacher, so I understood his struggles early in his career trying to be a full time teacher and a full time writer. Fortunately for him, and for us, his fans, he was able to be successful enough as a writer to write full time.

2. If you could pick just one book to read for the rest of your life, what would it be and why?

Tough question. Christopher Lee said he read Lord of the Rings every year, and picked up something new from it every time he read it. It took me two decades (and more importantly three movies) to finally get through those books, but I suspect, like Saruman himself, I would probably find something new in them every time I re-read them. That or A Christmas Carol, by Charles Dickens, which I never, ever get sick of…

3. What’s the worst job you’ve ever had and why? What was the best thing about that job and why?

Picking garbage in a city-garbage dump (I know it sounds like an oxymoron). The worst part of it was cleaning out the mass bins, where people throw everything from diapers, to compostable materials, to – well – everything under the sun. The worst material to clean up was old, wet, decaying grass – the smell of that was worse than any diaper. The best thing about that job was that it taught me almost instantaneously that that was not a career I wanted to have any time soon.

4. Why should people read YOUR stuff? Who’s your target audience and why?

My writing is grounded in the larger, societal issues of today. My target audience is myself first and foremost, and that is who I write for. If I don’t like what I’m doing, and no longer see any value in it, then I stop, because I wouldn’t expect anyone else to see meaning in it either. That is what I would tell anyone pursuing a craft, hobby, or vocation, regardless of what it is – do it for yourself first (you’re the one who has to live with yourself until the end of your days, after all), and then decide if you want to share it with the rest of the world. If you do, awesome and thank-you for doing so! If not, well, that’s fine too. It’s your life, and your contentment meter that you’re ultimately gauging, so if you’re happy with your decision, more power to you.

As the old saying goes, truth is stranger than fiction. Sometimes my stories come right out of the news, usually those stories where I think, “how on earth could that have possibly have happened?!”

All the Devils Are Here is currently available through Amazon.