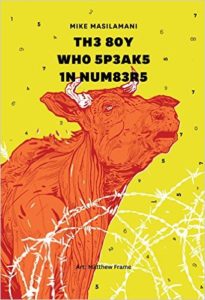 The music: “When Universes Collide” by Gogol Bordello

A month ago I was browsing through the kids’ books section of a boutique in Auroville, Tamil Nadu, India, looking for books for my son. He loves myths and historical stuff, so I thought he’d enjoy kids books from another culture. I stumbled across this week’s book, Th3 8oy Who 5p3ak5 1n Num83r5. I thumbed through it, assumed it was a book about a dyslexic kid or something, and bought it without reading the back. I read it last week, thinking I could discuss it with my kid after he read it – and holy crap. It was not what I expected.

The story follows the unnamed title character as he navigates a refugee camp in war-torn Sri Lanka (I feel horrible for not knowing details about the Sri Lanka civil war; I remember hearing about the Tamil Tigers a few years ago, but I didn’t know much about them.

Well, turns out there was a major war. Tens of thousands killed, more displaced, and, like any war, both sides lying about what happened while blaming the other.

My focus in my non-writing life is on child trauma in underprivileged populations. I spent a year at an elementary school with a large refugee population, with families from around the world. So when I read a book like this one, I marvel at the strength it took them to make it through alive and safe. And I cry that they had to experience those atrocities.

The song this week is by a gypsy punk band, Gogol Bordello. This song is about war and what happens when you love someone on the wrong side. It’s not a direct match for Th3 8oy Who 5p3ak5 1n Num83r5 , but it’s complementary.