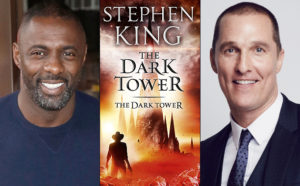 The Gunslinger features Idris Elba as Roland and Matthew McConaughey as Flagg – photo from EW.com

The books: The Dark Tower series by Stephen King

Like many (most? very few?) kids, I picked up my first Stephen King book in middle school. I’d read my way through the entire YA section and most of the sci-fi/fantasy section at my nearby library and branched out to horror with his Eyes of the Dragon, which first introduced me to Flagg, who also appeared in The Stand and, of course, The Dark Tower series.

I vaguely remember reading the first book in the series, The Gunslinger, in high school and not being too impressed. However, I kinda have a thing about reading the rest of a series if I’ve started it (I actually made it to Wheel of Time book 10 – the furthest of just about anyone I know), so I pushed on with The Drawing of the Three – which was pretty good. And they got better after that, with Wizards and Glass being pretty damn amazing, until they suddenly weren’t good at all, but I pushed on and the ending was worth it, because it was one of the best, most appropriate endings the series could have.

And then I got sidetracked to other authors, and into not really having time to read, and didn’t really think much about the series.

Until the powers that be decided to make it into a movie. A real movie, actually cast and happening, and not just rumors. I decided to reread the series.

A quick summary: Roland of Gilead is the last gunslinger, chasing a man in black across the desert in order to learn more about the dark tower and maybe get some revenge. He teams up with three people from our world -Eddie, Susannah, and Jake – and they go on a bunch of side quests while trying to save the tower, which is kinda the linchpin of all universes.

Here’s my thoughts on them (without specific spoilers):

Book I: The Gunslinger – It’s a lot better than I initially thought. It sets up Roland’s world nicely; minimal backstory but it’s still intriguing.

Book II: The Drawing of the Three – I like Eddie. I’m not impressed with Susannah. And I’m confused as to why they fall in love, other than what some kids described to me as “the airport phenomenon” – basically, you’ve been away from viable partners for so long, everyone becomes attractive, including people you’d never hook up with otherwise (1. Yes, I realize this has nothing to do with airports, and 2. We’d been out of the country for 2 weeks at this point). Applied to this book, it seems they fall in love because there’s no one else to have a relationship with. Nothing says “This relationship will last” like desperation.

Book III: The Wastelands – Nothing really happens in this book. A lot of walking. Interactions with new characters. Killing of some of those characters. And Flagg pops in.

Book IV: Wizard and Glass – So maybe King isn’t actually great at the love aspect of storytelling, because Roland and Susan also fall for each other because they’re there (and because of teen hormones). This book is a wonderful flashback to when Roland was a teen with visible emotions, and it nicely sets him up as a badass adult. This book is also probably the best in the series.

Book V: Wolves of the Calla – Much like book 3, there’s a lot of walking. Interactions with new characters. Killing of some of those characters. This is also where the deus ex machina begins to ramp up. “Oh, hey, let’s just time travel and leave ourselves notes so that everything will turn out peachy.” Also, the end of this book starts the “Holy crap, what the hell does he think he’s doing?” reactions.

Book VI: Song of Susannah – More time travel/world hopping. At this point, you’re pretty much reading because you’ve already invested so much, you may as well finish the series. King is starting to tie threads from all his stories together, but then he kinda just craps out. Maybe he’s spent all his creative energy on other books.

Book VII: The Dark Tower – So, you wanted everything wrapped up? Sure. And then let’s throw in a new character in the last 100 pages of a 7-book series spanning over 4000 pages, and let’s give him a magic ability that miraculously saves the day. Ugh. But at least the ending was perfect.

Overall: The series is well worth the read. Sure, it drags at some points. Some of the cameos are beyond stupid (you know who I’m talking about, Stephen King). And there’s a lot of moments where things wrap up too nicely due to “serendipitously” having the right object and being in the right place at the right time, because they went back and warned themselves and planted items. But King’s worldbuilding is second to none, a nice blend of fantasy and post-apocalypse and now for a setting in “a world that has moved on.” I strongly recommend reading the books, before the movies come out.

The music of this is Five Finger Death Punch’s cover of Bad Company’s “Bad Company.” Because Roland and his pals and gunslingers first. They have their own code of honor, but they won’t hesitate to gun you down if you get in the way of their quest for the tour.