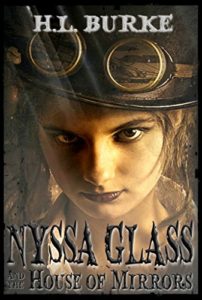 The books: The Nyssa Glass series by H.L. Burke – The House of Mirrors, The Juliet Dilemma, The Cutpurse Kid, Clockwork Christmas, and The Electric Heart

The music: “Sacra” by Apocalyptica

H.L. Burke made her mark with dragons (the Dragon and the Scholar series), then moved onto a fantasy series about elemental beings competing to take over the human world. Her Nyssa Glass series marks a departure from fantasy, into steampunk. However, her main character is still the same – a strong female who isn’t going to let anything stand in the way of her goals.

And Nyssa has a lot standing in her way. Orphaned at a young age, she was raised by an uncle who forced her into a life of petty crime. She managed to escape (before the series begins) and reform her life, but just as things were getting turned around for her, she was forced back into that life. This time, though, she wasn’t going down without a fight.

The rest of the books in the series detail her attempts to stay honest despite her past following her around. She makes some friends along the way that support her based on who she is, not what she did, giving this series a good moral for its readers.

The five books in the series are a quick read that would be great for anyone looking for an imperfect yet strong female role model.

The books are a bit dark at times – there’s a lot of violence – so for the song I picked this instrumental number by Apocalyptica. Generally I try to match song lyrics to book themes, but in this case the music sets a fitting tone for the series.