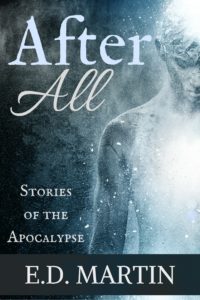 It’s almost Halloween, so I’m continuing on with excerpts from several related short stories I wrote this summer, all interconnected and dealing with the apocalypse.

This week I’m pulling from “Passing,” the story that ties together all the other ones. This excerpt picks up from last week’s.

A small boy sat on the forest floor, tear tracks streaking his dirty face. Jet’s specs tried to scan him but blinked out, and he pushed them off his face.

Specs were Spark-proof; they might go down, but both sets at once?

Jet aimed his immobilizer. Just as his finger began to squeeze down on the trigger, the kid winked at him. Static burst across his comlink as the kid mutated into his energy form, and then all went black.

I’m planning to release the whole collection next weekend, so you’ll be able to find out just what Sparks are and who Jet is.