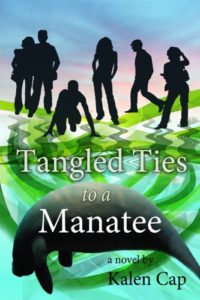 The book: Tangled Ties to a Manatee by Kalen Cap

Tangled Ties to a Manatee takes us through the interconnected lives of a large cast of characters – college students who work at a group home where the nephew of a wildlife retreat owner/director lives, and some of the college kids’ friends work there too. The residents of the group home like to go to the local zoo, where the ex-wife of a professor at the college works. And one of the retreat employees is actually a private investigator undercover because some people think it’s a cult, and her supervisor is undercover at a coffee shop where the professor’s brother works and so does that nephew. Oh, and the husband of one of the cultists works at the zoo too, and one of the college students is also a fortune teller for the cult leader. And then a couple guys come along trying to run a scam using the wildlife retreat, but a pregnant manatee named Ankh manages to save the day.

Although confusing at times, the author skillfully brings it all together throughout a plot that’s reminiscent of a PG-rated Big Trouble (which is an awesome movie you should definitely watch). The only thing I’d want changed is to spend more time on a few main characters, rather than a little time on everyone. However, each character has his or her own voice and personality, and each contributes something to the storyline.

Overall, a fun, light read that I highly recommend.

(Also, Sigur Rós aren’t really Vikings but Skálmöld are. Not that that has anything to do with this week’s book or song.)