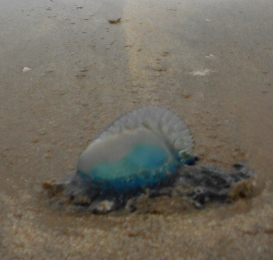 Found this on a Galveston beach. Is it an alien lifeform? Inflated plastic? Postmodernist storyteller me says both are plausible!

I’m on a quest to take as many research methodology classes as I can while getting my PhD, and this semester one that I’m taking is qualitative. I’m a quantitative person, so this is a major thinking shift.

Qualitative is case studies and interviews and ethnographies and telling the story one person or group at a time, while quantitative is surveys and statistics and applying your findings to larger groups.

One of our first assignments is a position paper, in which we explain which paradigm we follow, relate our history that brought us to that paradigm, and then explore our biases that will affect our qualitative research. I’m stuck between two: postpositivism and postmodernism.

Postpositivists think that the objective Truth is out there, but our methods of seeking it are flawed by our biases.

Postmodernists think everyone has a truth, and your truth isn’t any more valid than mine because it’s all relative.

Basically, the two are on opposite ends of a spectrum (well, positivism and postmodernism are).

(Fun story: I went to a Catholic high school, and my junior year we had to take Apologetics, which we defined as apologizing for your faith but is actually defending it. I routinely argued with our teacher, a poor priest right out of the seminary, that all religions were seeking the same end goal – peace and love and happiness in whatever comes next – but just had different ways of reaching that goal. Kinda like a bunch of people climbing a mountain, but from different sides – they all want to get to the top but are each taking a different route. The teacher strongly encouraged me to sleep or read in class so that I wouldn’t constantly pull apart the course material.)

As a researcher, I want to find Answers. As a social worker and social justice warrior, I want underrepresented voices to be heard so that we can bring about change to unequal systems. As an author, I want to tell my character’s story and make it just as valid as anyone else’s.

My question tonight: If I have my perception of the truth, and you have your perception of the truth, and everyone reading this and in the world has their perceptions of the truth, how do we as researchers decide whose truth is most valid? Applying a postmodern perspective, can we even decide that someone’s truth is invalid, and how does this fit into our role in “mitigating against epistemic injustice in educational research?” When is it okay to judge a culture or individual as “wrong” or “bad” when its members are doing their best according to their beliefs?