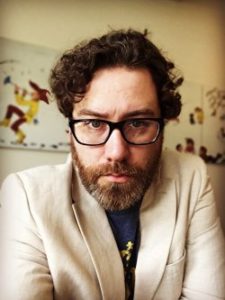 Craig A. Hart is the stay-at-home father of twin boys, a writer, editor, Amazon bestselling author, lover of the arts, and only human. He has served as editor-in-chief for The Rusty Nail literary magazine, manager for Sweatshoppe Media, and director of Northern Illinois Radio Information Service. He lives and writes in Iowa City with his wife, sons, and two cats.

In his debut novel, Becoming Moon, a boy struggles to be himself amid pressure from a repressive family. His desire for success causes him to betray his principles, but brings money and recognition. He is given a final chance to prove himself—but only if he is able to set his past aside. Becoming Moon can be found on Amazon, Barnes & Noble.

1. Why should people read YOUR stuff? Who’s your target audience and why?

I try to write fiction that is so honest it hurts. I don’t avoid topics just because they’re difficult; in fact, I’m drawn to difficult, uncomfortable topics. I don’t promise an easy, heartwarming read, but I do promise to be straightforward and present the truth as I see it. If that’s your jam, come on over!

Spend some time writing in France.

Live in a cabin on a lake (preferably Lake Michigan, which I love).

Circle the globe and write a travel book about the experience.

3. What’s the worst job you’ve ever had and why? What was the best thing about that job and why?

The worst job I ever had was doing telephone surveys. There were no redeeming qualities. I lasted one day. I also drove a delivery truck in Michigan for a few years. That was difficult, because it was very physical work performed in almost every imaginable weather situation: snowstorms, sub-zero temperatures, pouring rain, heat, humidity. The good part about it was that it also gave me a lot of time to think about writing.

I’m currently working on a book that takes readers back to the town in which Becoming Moon is based. It isn’t a sequel, but it uses certain aspects that will be familiar to fans of the first book.

5. Thinking about the stuff you’ve written, who’s your favorite character and why?

My favorite character is Moon, of the eponymous novel. Nigel Moon is an aging writer who has seen success and failure, and understands the life of a writer like few others. He is a character I’d love to sit and drink with, and one I’d love to become some day.

Becoming Moon is currently available through Amazon and Barnes and Noble.