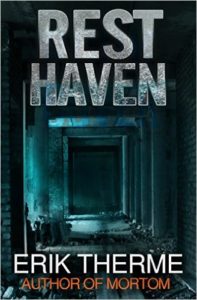 The book: Resthaven by Erik Therme

The music: “Mine” by Disturbed

If I, as a rational adult, were pressured to break into an abandoned nursing home in order to appear cool in front of my peers that I didn’t even really like, there’s a good chance I’d have a brief two word response and then I’d promptly leave. Same if I were pressured into having a scavenger hunt in that same creepy building.

The plot of Resthaven, however, revolves around teenagers doing teenage things – like breaking into said creepy nursing home. Once inside, either in order to look cool or simply because their frontal cortexes are far from fully developed, those teens continue making irrational – but wholly teen-logical – decisions in a quick-read story packed with thrills and surprises at every turn.

The story starts out with new girl Kaylee arriving at her classmate Jamie’s house for a routine sleepover, only Jamie strong arms the girls into exploring Resthaven, an old empty nursing home. She promptly gets mad at them and abandons them to a night of horror.

I kind of expected the book to be more supernatural, but the fully-human villain is even scarier than a ghost or monster. Every twist is possible, if not plausible, as Kaylee and her friends find themselves deeper and deeper in a mess that rivals any 90s teen horror flick.

As for the music – on of my son’s favorite bands is Disturbed, so we’ve been listening to a lot of their CDs to get ready for his first rock concert (Disturbed and Breaking Benjamin last night in St. Louis – it was awesome). The music from the song really fits the mood of the book. The lyrics don’t fit very well, but since you can’t really understand what the guy’s saying half the time, it doesn’t really matter.