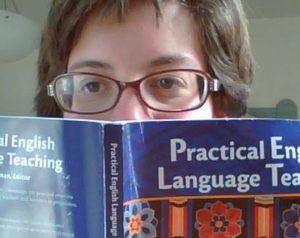 Today’s Friday Five focus is Corinne Morier, author of fantasy and YA short stories and novels.

Corinne Morier is a bibliophile-turned-writer with a penchant for writing stories that make readers think. In her free time, she enjoys blogging, playing video games, and swimming. Her motto is “Haters gonna hate and potatoes gonna potate.”

“The Photo” is a flash fiction story about a ghost who can’t pass on to the afterlife because he still has regrets in this world. It was published on Roane Publishing’s blog as a part of their Flash Fiction Friday series.

1. What’s the worst job you’ve ever had and why? What was the best thing about that job and why?

I don’t want to say “worst job,” because there were a lot of great things about this job. Also, I’m not one to badmouth my former coworkers. But last year, I worked as a camp counselor for a summer program, and the program wasn’t very well-organized. I would say that I spent the length of the program very dissatisfied with multiple things, such as how solutions were implemented and how the counselors themselves, who worked directly with the students, were able to receive updates and information from the program directors. But I do look back on that job with great fondness – I met a lot of wonderful people, and my students were all fantastic. I don’t regret working there at all. And the best thing about that job was definitely the students – I loved interacting with them and hearing all their experiences. They really felt like my kids.

2. What’s your current writing project and what are your writing plans for the near future?

Right now, I’m working on revising and perfecting the first book in a fantasy trilogy I call The Red Sorcerer Trilogy, in preparation for publishing it. After I finish Book One, I’ll work on Books Two and Three, as well as write a few other projects I’ve got in the works, like a novel-length adaptation of Hans Christian Andersen’s The Little Mermaid and a book about a girl who goes to Japan to study abroad. A group of my writer friends and I are planning to publish an anthology of fairy tale retellings, and December is our tentative release date.

3. What is the most important thing that people DON’T know about your subject/genre, that you think they need to know?

Fantasy and science fiction are two different genres. When I go to the library or the bookstore, they’re always shelved together, but they have one crucial difference. While they may seem like the same thing in that both can have dragons, spaceships, aliens, or whatever else have you that doesn’t exist in the real world, fantasy doesn’t have to explain why it happened. In science fiction if you had dragons in your story, you’d have to also present a scientific reason for them to exist; for example, they evolved from dinosaurs, or something along those lines. But in fantasy, you can just say “Here be dragons” and as long as the world you create could potentially have dragons, you don’t have to explain how they evolved from pterodactyls and managed to survive all these years without detection by humans. The reader will just accept that they exist in the world of your story.

4. What’s the weirdest thing you’ve ever researched for your works or biggest/most out-of-the-ordinary thing you’ve done while researching?

Well, just this morning, I was looking up Australian fairy tales and found one about a family that gets eaten by a dog and then the dog gets cut up or something. I don’t remember the exact details, but I asked an Aussie friend and he says that’s about right for a fairy tale.

That’s very simple. There’s a company called Writer’s Inspiration, Inc. in Colorado. Every so often when I’m itching for a new story idea, I send them the processing fee of $15 and they send me a list of ideas I can use in a novel or a story.

That’s just a nice way of saying my muse is a jerk. My ideas come from all around me – my fantasy trilogy stemmed specifically from wanting to create my own roleplaying characters. My Little Mermaid novel adaptation stemmed from being eternally pissed at the ending to the Disney movie, and I decided to write a better adaptation that didn’t have a cop-out for an ending. My book about a girl who goes to Japan to study abroad stemmed from the Genki series of textbooks we used in our Japanese class in my undergrad. It all starts with that little voice inside me that goes “What if?” If I can’t shut that voice up, I write a story to answer that question. Sometimes I’m not even looking for them and I find new story ideas. My muse makes me write them all, and I want to punch him. He’s such a jerk.

“The Photo” is currently available to read from Roane Publishing.