Let’s continue with the five-part story I’ve been posting from this month, “A Family Tradition,” in my short story collection, The Futility of Loving a Soldier.

Background: Joos, who served in WWI (and whose story is told in the first part of “A Family Tradition”), is estranged from his son Maarten, a man who served during WWII and has spent his life battling his father’s legacy, as conveyed by his single mother, Ophélie. Joos has shown up at Maarten’s house, but Maarten isn’t sure if he’s ready to reconcile.

“It’s a lot to ask, so out of the blue,” Joos said, “ but at the least, I’d like to see my grandsons. I can only guess at what you’ve told them, and I want them to know who I really am.”

Who was Joos, really? Nothing but an old soldier making up excuses for missed chances and regretted choices. Maarten brushed aside the similarities crowding his mind, focusing instead on the picture his mother had always painted. He would never be like Joos.

“I bet we have a lot in common, Maarten.”

He stared at his father, his face hardening. How dare this man come here now, thinking they were anything alike! 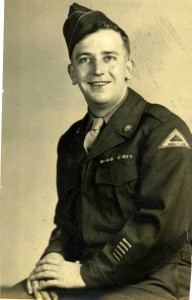 My grandfather during WWII

The Futility of Loving a Soldier is on sale for just $.99 (regularly $3.99) – pick up a copy to read more about Joos and Maarten, as well as how the legacy extends through three more generations of sons. Available everywhere – Amazon, Barnes and Noble, iBooks, Kobo, and Smashwords

Then post a link to your eight sentences blog entry, or join the fun at the Weekend Writing Warriors website.