Today is Father’s Day, and what better way to celebrate than to continue with the five-part story I’ve been posting from this month, “A Family Tradition,” in my short story collection, The Futility of Loving a Soldier.

Background: Joos, who served in WWI (and whose story is told in the first part of “A Family Tradition”), is estranged from his son Maarten, a man who served during WWII and has spent his life battling his father’s legacy, as conveyed by his single mother, Ophélie. Joos has shown up at Maarten’s house, but Maarten isn’t sure if he’s ready to reconcile.

“Ophélie wrote me to tell me you’d enlisted; she wanted to rub in that you were in combat and weren’t a coward like your father.” Joos stared at his son, his hands still playing with his hat, and said, “I sent her so many letters, trying to get her back and trying to see you, asking for forgiveness.”

“She never forgave you.” Even on her deathbed, Ophélie had cursed Joos.

“And that’s why I’m here, Maarten—I have cancer, most likely only a couple months left. There’s nothing the doctors can do, but I don’t want to die without you understanding my side of what happened. I want you to forgive me and to know what happened wasn’t my fault.” 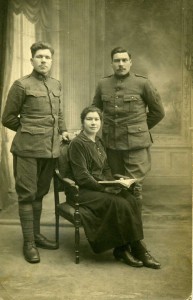 My great-grandfather in his WWI uniform (left) with his brother and sister.

Will Maarten forgive him? And how will this decision affect Maarten’s relationship with his own sons? Get a copy of The Futility of Loving a Soldier to find out!

Then post a link to your eight sentences blog entry, or join the fun at the Weekend Writing Warriors website.