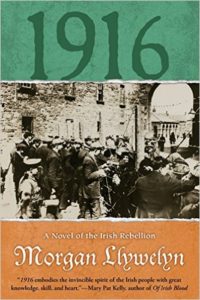 The book: 1916: A Novel of the Irish Rebellion by Morgan Llywelyn

The music: “Zombie” by The Cranberries

As a kid, I really enjoyed reading historical fiction. I read all the books in the Sunfire series, in which a young heroine had to choose between two suitors while going through an event in American history (the 1918 Spanish Flu outbreak, piracy in New Orleans, the Galveston Hurricane, etc). I learned a ton about history this way, especially obscure events that received little, if any, attention in the classroom.

I also remember enjoying Morgan Llywelyn’s Druids, about Vercengetorix and the Celts, so when I was in Goodwill looking for a book and saw 1916 for just $.88, I picked it up; I liked the author and didn’t know anything about the Irish struggle for independence, so it seemed like a good fit.

1916 fictionalizes the events leading up to the Easter Rising – on April 2014, 1916, a group of men seized government buildings in Dublin and proclaimed Ireland’s independence from Britain. The book follows Ned Halloran, a young teen who gets caught up in the action while attending a school run by Patrick Pearse, one of the leaders of the rebellion. In addition to tracing the Irish independence movement through the eyes of an Irish citizen, it tells the story of Ned’s sister in America and her attempts to establish a new home there while trying to maintain ties with her home country.

First off, this book is dense – nearly 500 pages packed with historical figures and events over four years. Because of my lack of knowledge of the subject, I struggled to keep many of the characters straight, especially since they played minor roles in the overall fictitious plot. I think I would’ve had a better time of it if I’d had any familiarity with the topic.

Overall, however, I enjoyed this book. It explores a lot of themes: class and its relationship with British colonialism, patriotism, honor, self-determination, and feminism, just to name a few. I realize the author – winner of the 1999 Exceptional Celtic Woman of the Year award – is biased with her allegiance to Ireland over Britain, but she manages to keep the opinions on Home Rule to her characters without preaching.

Amazon has informed me that this book is the first in a series of novels about Ireland’s fight for independence; I’ve added the rest of them to my to-be-read list. This is a topic that doesn’t come up in America very often, and I’d love to know more about it.

As for the music, a local radio station plays songs from the “Alt Vault” – mid-90s alternative songs. I heard them all thousands of times when they were originally aired, especially The Cranberries’ “Zombie.” I knew they were an Irish band, but I’d never really paid attention to the lyrics. However, when the song came on a couple months ago, these lines stuck with me:

The song was about the IRA’s violent struggle at the time to gain independence from Britain, and about the lengths people will go to for freedom. There aren’t any armed struggles in Ireland anymore, but we see the same issues – the same theme – in Syria, in Palestine and Israel, in Darfur and dozens of other places around the world. This song is fitting for today, Memorial Day, as we remember those in the armed services who gave their lives for their cause. But it goes a step further in memorializing those who didn’t serve and lost their lives as well.