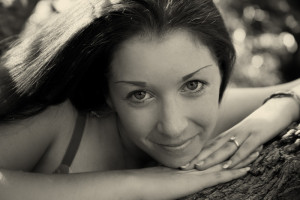 Ciara Ballintyne grew up on a diet of adult epic fantasy, leaving her with a confused outlook on life – she believes the good guys should always win, but knows they often don’t. She is an oxymoron; an idealistic cynic. She is a browncoat, a saltgunner, a Whedonite, a Sherlockian, a Ringer, a Whovian…and an INTJ. Her alignment is chaotic good. Ciara lives with her husband, two daughters, and a growing menagerie that unfortunately includes no dragons. She published her debut work, Confronting the Demon, in 2013.

In the Company of the Dead is her first book with Evolved Publishing. As Death’s Left Hand, Ellaeva is forbidden to hunt down her parents’ murderer—until duty and revenge lead her to the besieged castle where Lyram Aharris serves out his exile. Together, they must fight against jealous princes and clashing gods—but the greatest threat comes from an unexpected quarter.

1. Thinking about the stuff you’ve written, who’s your favorite character and why?

Right now it would be Ellaeva from In the Company of the Dead, and why is because she is the most like me—not me, just the most like me. You’d think that would make writing her easier, but it actually makes it harder. You know how to write the character, but you feel more exposed doing it. I love that she’s tough and independent but vulnerable at the same time. But she’s not all emotional and illogical the way some people claim women are—her ability to make the hard, right decision will take your breath away, even as it tears her apart from the inside. Now that’s strength.

If I could have any power at all, it would be the ability to turn into a dragon. And with anything involving dragons, the question is not ‘why?’—it’s ‘why not?’

Defenestrated. It’s just so deliciously and explicitly threatening. I’m not just going to kill you—I’ll defenestrate you. Also, it tickles me that there’s actually a word for this.

Susurration—doesn’t it just totally evoke the very thing inside your head?

Dearth—can’t really say why, I just think it’s a quirky little word you don’t hear enough now and that has such a cool meaning.

Literary characters like me are hard to find, and when you do find them, they are often villains. I’m an INTJ on the Myers Briggs Type Indicator. You know who in fiction is an INTJ? Hannibal Lector. Magneto. Emperor Palpatine. The Master. Tywin Lannister. Are you getting the vibe yet? It took me a little while to find some better examples. Snape. Gregory House. OK, marginally better. Kate Beckett from Castle. That’s better, but while I like her I don’t really identify with her. Rand al’Thor from The Wheel of Time. Took me a while, but I can see it now. Still, we share certain tendencies but we’re not really alike. Oliver Queen. That was a little uncomfortable, especially in Season 3 when he appeared to have betrayed his friends—because I would have done it too.

But the one I feel is most like me? Carol in The Walking Dead. That episode with the little girls? I knew what she would do, because it was the only logical thing to do, the only real option in a post-apocalyptic world—it was the thing I would have done. Not necessarily proud of that, but there you have it.

What’s right, and what needs doing, aren’t always the same.

5. What’s your current writing project and what are your writing plans for the near future?

I am currently writing On the Edge of Death, which is the sequel to my soon-to-be-released In the In the Company of the Dead. They are the first two books in The Sundered Oath series, and I’ll be working on this series for the foreseeable future. There will be four books in total, with release dates each April until 2019. The books follow the tale of Ellaeva, the strong but lonely Left Hand of Death who has to make all the hard choices nobody else can—or will—and Lyram Aharris, a military genius exiled for breaking his prince’s nose and intent on drowning himself in a whisky bottle following the murder of his wife.

In the Company of the Dead is currently available at Amazon.