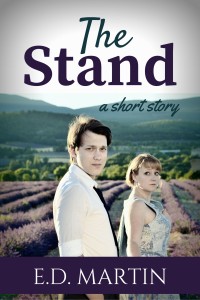 This month’s excerpts are from the next stand-alone short story I plan to release, “The Stand,” about an American guy’s up-and-down relationship with a mildly crazy French girl. I hope to have it ready to go in the next couple weeks.

In this week’s scene, Daniel is looking back at his relationship with Mireille.

Mireille denied everything—her looks, her brains, her talents—while claiming all her faults.

“Daniel,” she whispered to him one February night after poking him awake, “I don’t think I am real. How do I know if I even exist?”

He rolled over, blinked his eyes open. “Mireille?”

At this point she was at his apartment several nights a week, although often for only a few hours; she crawled into bed with him after he was asleep, and often left before he was awake. Sometimes he’d wake to find her curled into a ball beside him, her features so relaxed and beautiful that he’d spend an hour just watching her in the mottled sunlight streaming in from the unshuttered bedroom window, loathe to disturb her, and they’d both end up late for work.

And other times, like that night, she’d slide in next to him and wake him up, to talk about whatever was keeping her from sleeping at her own place, and after he’d calmed her down, reassured her, answered her questions, she’d slip out again. He was never sure which he’d get with Mireille.