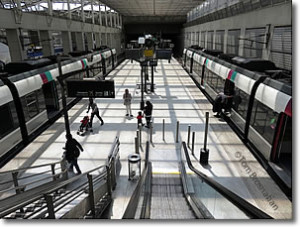 This scene is his initial arrival in France.

Finished with customs, Daniel stepped uncertainly into the throngs of people in Charles de Gaulle airport. His French was rusty, much rustier than it should’ve been considering he’d be living in the country for a year, and all he knew was that a woman named Mireille Dubois was meeting him at the TGV station. He drifted with the crowds, finally arriving near the train platform. He set down his bag, rubbed his shoulder, and looked around.

A short woman in her mid-twenties approached him. “Daniel?

Looking back he would always tell himself that time stopped when she first said his name, that he memorized every detail of her face and body, that he could pinpoint the moment he fell in love, but really he just nodded, exhausted after the long flight. “Mireille?”