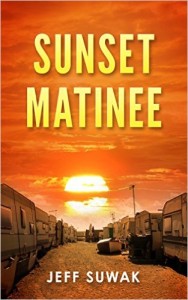 The books: “The Sunset Matinee” by Jeff Suwak and “A Place to Die” by me.

The music: “Some Day” by Shinedown

That’s the issue explored in these two short stories. In “The Sunset Matinee,” Grady, a teenage boy whose main hobby is getting high with his friends learns he has cancer, probably terminal. His friends and his little brother are scared but unable to lose face by showing it. His single mom blames herself for poor life choices that led them to this point. Grady has a choice: he can keep on his current path as one of his trailer parks’ Stoner Boys, or he can give back to the only community he’s known.

“A Place to Die” tells the story of a college girl, Libby, who spends the summer helping out at her mom’s bed-and-breakfast-turned-hospice. She’s tasked with keeping an eye on Mr. Calloway, a mid-thirties businessman who’s determined not to let his illness get in the way of life. As their friendship and his illness progress over the summer, her ideas of what death should look like – and how we should react – are challenged, leaving her a different person at the end.

This week’s song is one of my favorites by Shinedown. It’s a song with a strongly mixed response to loss: blame, regret, sadness, resilience.