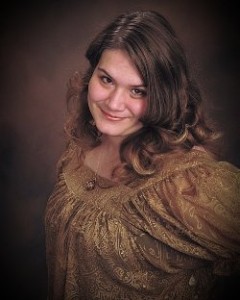 She began telling stories before she could put pencil to paper. For over the last decade, her concentration has been solely on the creation and completion of the Amüli Chronicles.

At the moment, she’s working on the sequel to The Soulbound Curse and the fourth of her middle grade fantasy series, Frendyl Krune and the Nightmare in the North. Plans for more tales from Inrugia are scattered across her desk.

She lives in Frederick, CO, with her beloved Micahl and two cats, Middii and Eva.

The Blood of the Sun is a magical gem that gives its wielder the might of the first Amüli king—the most powerful man in recorded history. While Frendyl Krune may have control of it now, someone is determined to take it away—no matter the cost.

1. What are some of your favorite words and why?
I love disconsolate and contretemps. I discovered these words in junior high, and used them often. Something about how the sounds mesh make these words simply gorgeous to hear!

2. What do you want your tombstone to say?
Alas, my circuits shorted out.

3. What is the most important thing that people DON’T know about your subject/genre, that you think they need to know?
Fantasy should not ask you to suspend belief, but to believe that the events occurring abide by the laws of the world the story takes place in.

4. What author has influenced your writing style/subject the most and why?
Numerous authors have influence my writing style over the many years I’ve written. Perhaps the most impacting and long-lasting are Brandon Sanderson, George R. R. Martin, and Bruce Coville. Many of my books would not exist if not for these authors’ role in my life.

5. Where do your inspiration and ideas for your stories come from?
To be honest, I think constantly about my works; if there’s a problem that needs solving, I jot out different ways that a character might try to solve it, and go from there. I suppose my ideas just come from nowhere. I abide by the laws of Inrugia as I write, and the limitations of the character. These two major aspects of problem solving often help to create events and cause the ideas to unfold almost on their own.

The Soulbound Curse and Frendyl Krune and the Blood of the Sun are currently available through Amazon and other retailers.