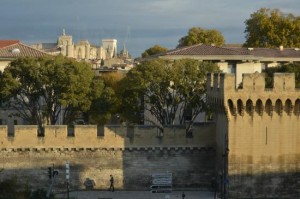 In this week’s scene, Daniel is leaving France after a year spent teaching in Avignon.

Daniel has reached the train station, conveniently located on the edge of the old town, of the downtown. A year in France and he still isn’t sure what to call it, a city so different from any in America. Always paranoid about not having a seat, he bought his ticket weeks ago. He’s early, of course; traveling in the States has trained him to arrive hours ahead of time. He sits on a bench on the edge of the terminal, half watching the people rushing by.

He hates train stations, airports too. Nowhere else is his aloneness accentuated as much as these places, where couples kiss as if they’ve been parted for years, where they embrace as if they’ll never see each other again. He’s jealous of their passion and their partners. He lays his head on his hands, propped up on his knees, closes his eyes, and waits for his train to Paris.