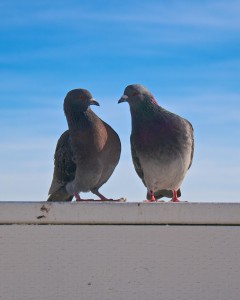 This week’s snippet is the rest of last week’s scene. After deciding it might be fun to be a pigeon, Mireille ran around the square with her arms outstretched like a bird. Daniel was not amused.

“Mireille,” he hissed at her, grabbing her arm and pulling her roughly to her feet, “you’re not a bird. You’re a girl, a grown woman, so act like it.”

She stared at him and the light faded from her eyes.

Daniel’s heart dropped into his stomach; he hated when she had that look, so defeated. He reached his arms around her, pulling her into a hug, but she stiffened against him. “Mireille, I didn’t mean it. You can be whatever you want, d’accord? A bird, a gypsy, a crazy girl flying around la place, anything.”

She nodded, her body relaxing against his, and he sighed into her hair.

That was the last time she went to the grotto, to the Palais des Papes, with him.