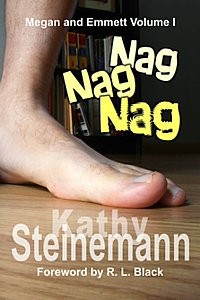 The book: Nag Nag Nag: Megan and Emmett Volume I by Kathy Steinemann

The music: “Shoot Me” by Nik Kershaw

I read a lot of heavy stuff – literary classics, dark thrillers, textbooks – and so it’s nice to come across light, funny stuff. And that’s exactly what Kathy Steinemann’s book, Nag Nag Nag is.

It’s a collection of stories about a couple, Megan and Emmett, who’ve been married over 40 years. They know how to irritate each other, and frequently have fun doing so. But at the same time, they’re still in love, which is evident not only by their bursts of passion, but in the way they irritate each other – it’s loving and playful, not spiteful at all.

Throughout the book, readers discover humor in the mundane, from a camping trip with their grandkids, to a burglary of their house (foiled by their cat), to a simple trip to the grocery store. This humor is sweet, often crude, but realistic and refreshing.

The music to go with the readings is a fun song by British 80’s pop sensation Nik Kershaw. He’s traded in his teen crush status for middle age, and his songs reflect that. “Shoot Me” is a catchy song about his thoughts on aging. Megan and Emmett aren’t quite to this point yet, but I can clearly envision them having a conversation that follows a similar vein.