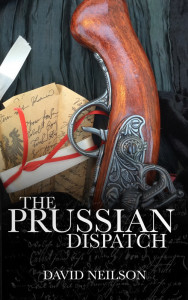 Having retired from teaching in further education in Glasgow, he lives on the Rhine growing runner beans, courgettes and kohlrabi.

1. What’s the worst job you’ve ever had and why? What was the best thing about that job and why?
I had a student job handing out flyers for a steamer on the Clyde Coast, near Glasgow, Scotland, advertising day trips. It got unpleasant when the Captain was dragged into court on a charge on interfering with chidlren.

2. What’s your current writing project and what are your writing plans for the near future?
The Prussian Dispatch, which I’ve just published, is the first in a series of seven about Sophie and her work as an early private detective in Mozart’s Vienna. (She will never, never be allowed to meet Mozart in the series, by the way.) The second, Lay Brothers, focuses on Sophie’s war with the Jesuit Order. I’m getting feedback on that at the moment, though unfortunately not from any Jesuits, and plan to start editing soon.

3. Thinking about the stuff you’ve written, who’s your favorite character and why?
It could only be my main character, Sophie Rathenau, whose voice is always resonating in my head. She knows she’s the star turn and she doesn’t tolerate rivals. I can catch her sometimes thinking whether she’s tough enough in one scene, or vulnerable enough, or self-righteous enough. I really love it when one of the other characters shows a bit of independence, but the best moments for me come when Sophie says or does something outrageous, for example getting to get into a ball for free by pretending that a non-existent husband will pay, or trying to con a Jesuit rector into believing she’s a rich patroness. She puts her whole heart into gambits like that, and I notice that readers take well to them, too.

4. Where do your inspiration and ideas for your stories come from?
I really like my world – eighteenth-century Vienna in terms of music, surroundings and costume really appeals to me. I’ve wandered about central Europe so much that writing stories featuring its palaces and rat-infested alleys seems quite natural.

The Prussian Dispatch is available now through Amazon.