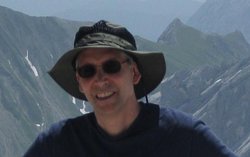 Jonathan has been “on the run” for some time, after exposing a covert and ethically questionable military project to breed super soldiers.

The facts behind the fiction of this project are revealed in the first novella, Relic. Disturbingly close to the truth, Relic describes a world in which human soldiers are replaced with something much deadlier, and much more uncontrollable, with consequences that could spell the end of humanity as we know it.

Jonathan Brookes is known to have spent the last thirty years weaving his way through one high tech company after another, leaving a trail of cancelled projects, failed mergers and corporate bankruptcies. He was last seen on a wooded trail between the Melville Nauheim Shelter and The Greenwood Lodge and Campsite on Route 9, near Big Pond, Woodford, VT.

His current whereabouts are unknown….

His latest book, Relic II: Resurrection, is a twisted tale of lust, greed, psychosis, and delusion. A child is born, and its mother dies during childbirth. The race is on to claim guardianship of this orphan, whose genetics are a relic of a lost race. In a perverse twist of evolution, this one child could unravel 30,000 years of Homo sapiens dominance of the Earth. Fact and fiction collide in this high-tension, fast-paced sequel to Relic.

1. What was your attitude towards reading when you were a kid?
Books! Couldn’t get enough of ’em!

2. What do you want your readers to take away from your works?
I want them to think. To consider other possibilities. To consider their own potential, and act upon that.

3. What’s the weirdest thing you’ve ever researched for your works or biggest/most out-of-the-ordinary thing you’ve done while researching?
Whether or not Neanderthals had a baculum (penile bone). All male primates except humans have one. It allows a male primate to instantly have an erection to get the deed done quickly and move on. None of that huggy-kissy foreplay required. Just in, out, then off to play with the boys.

5. Why should people read YOUR stuff? Who’s your target audience and why?
Convincing people to read my stuff is your job. That’s why I’m doing this interview.

Relic and Relic II: Resurrection are both available through Amazon.