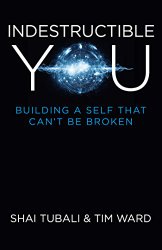 Tim Ward is an author, publisher, teacher, traveler, and blogger for the Huffington Post. He has written eight books, including four about his travels through Thailand, India, China, Tibet, Greece and Southern Europe, and Africa. He is also the publisher of Changemakers Books, an imprint of John Hunt Publishing.

His most recent book is Indestructible You: Building a Self that Can’t be Broken. The awesome experience of inner power comes from knowing that life, just as it is, and no matter how bad it might get, cannot break the strong and solid self that you have built.

Fredrich Nietzsche. I first read his books in college, while I was studying philosophy. What inspired me about him was how he used writing as a tool to unearth hidden realities. I believe most of the time we take reality at face value, accept that things are as they appear to us to be. Nietzsche convinced me that this surface world was a comforting delusion, but – a big but – our mind could be forged into an instrument to dig deeper, to a reality that is not known, but only groped for in the dark. His unclouded vision allowed him to see clearly into the future, to see that science would erode the Western World’s belief in God – and that the danger was that nothing would take its place. Without powerful spiritual values, what would become of humanity? The very best of my writing moves in this direction. I sometimes refer to it as “writing off the edge of the cliff.” In this state, I’m not even sure what the heck I mean while I’m writing. Afterwards, when I read it over, mostly of the time it is garbage. But occasionally, in the garbage, I find something gleaming.

2. Thinking about the stuff you’ve written, who’s your favorite character and why?

I wrote one book about my love affair with a woman Indologist while traveling across India (Arousing the Goddess) and what happened when we slipped into a tantric sexual relationship. What I love about her portrayal as a character is that readers are pretty divided about her. Many men who read the book see her as an amazing goddess. What a lucky guy I was to have been with her. Many women readers, however, she this character as a manipulative bitch. What a sap I was to have been used by her! To me it’s fascinating that this one story – which I tried to tell as objectively as possible – has such totally different interpretations by different readers.

3. What’s the weirdest thing you’ve ever researched for your works or biggest/most out-of-the-ordinary thing you’ve done while researching?

Okay, writing a book about early Goddess religions of Europe (Savage Breast: One Man’s Search for the Goddess), in a museum in Romania, I came across a series of hollow clay tubes with a small hole on one end labeled “penis tubes.” They were always found by the fire pits. Archaeologists theorized they might have been prehistoric fertility cult objects – or dildos! While I was in the midst of writing about this, one of the archaeologists I met on my visit wrote and said “STOP! We figured out what they are…these aren’t penis tubes, they are clay nozzles for bellows.” The wood and leather had long since rotted away, leaving only the inorganic hardened clay behind. It was a fantastic example of something completely open to interpretation but that made no real sense at all, that suddenly fell into place, and there was no doubt about what they meant any more. Wow.

4. What are some of your favorite words and why?

“Compromise.” It’s got a negative, even weak meaning to most people. But the roots of the word are com = together and promissum = promise. So a compromise is a “promising together.” When two or more people compromise, it’s a promising-together to work towards a common goal or purpose. This can unleash incredible creative energy. When I understood that, it totally transformed all my relationships. I write a whole chapter about this in Indestructible You: Building a Self that can’t be Broken.

People who want to change the world. People who want to look deep beneath the surface and deal with what they find. I believe we are at a time of incredible personal and social transformation. Climate Change will, in our lifetime, overturn everything we know- especially those of us living in the privileged Western world. And when it crashes, those who are resilient, tough, able to find inner resources and stay connected and caring – they are the ones who will be the best hope for humanity’s future. Otherwise – well, I think there’s a reason we are transfixed with Zombie Apocalypse shows. A part of us knows, deep down, that this is coming. So my hope is that those who read my books – indeed, anyone who thinks about the future – will build in themselves a strong, resilient and humane nature that is ready for the worst that may come. As a closing note, I would like to add: we should all be caring very much, and paying close attention to, the global Climate change conference taking place in Paris this December. It may be our last chance to change course and avoid screwing ourselves and the planet.

Indestructible You: Building a Self that Can’t be Broken is available now through Amazon.