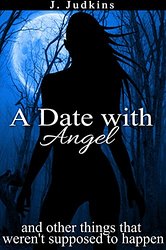 He works as a wage-slave in Omaha, Nebraska, living alone with his cat who thinks he can help by sleeping in front of the keyboard. He’s into movies and video games (role-playing games, specifically) and lately, writing. Generally, he doesn’t like to talk about himself.

In his novel, A Date with Angel: and other things that weren’t supposed to happen, Kim invites home a suspected alien woman named Angel. With Kim hiding her reason for why, Angel concludes Kim did so because she must be romantically interested in her. Things are further complicated because Kim suspects Angel is plotting to seduce her. Angel wants to blend in, and so does her best to fulfill expectations.

1. What’s the weirdest thing you’ve ever researched for your works or biggest/most out-of-the-ordinary thing you’ve done while researching?

I had to call up a furniture store and ask what material beds are shipped in. They’re wrapped in plastic. Claimed I was an author, too.

Immortality would be nice. I dislike knowing that my time is limited.

3. How much of your published writing is based on personal experiences?

Kim is a self-centered, antisocial geek who’d rather play video games and read books than interact with others. That’s me. Nature bores me, and I’d rather spend my time inside.

4. What is the most important thing that people DON’T know about your subject/genre, that you think they need to know?

5. What author has influenced your writing style/subject the most and why?

Jim Butcher – His Dresden books are ones I read again and again. I love how his main character is willing to do the right thing, no matter how much trouble it gets him into.

A Date with Angel: and other things that weren’t supposed to happen is available now through Amazon.