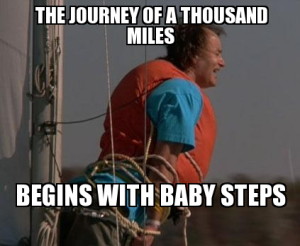 Every year, I set goals for myself, and every quarter, I review my progress. It’s already halfway through 2015, and here’s where I am (compared to where I want to be).

1. Write and submit at least one new short story every month, with the goal being at least 10 publications this year.

I’m up to about 15 half-written stories I carry around with me everywhere. I finish one class this weekend, and another doesn’t take much time, so for the next month I’ll have no excuse not to write (although I’m sure I’ll find several).

2. Write the rough drafts for a seven-part novella series, and maybe even publish one or two of them.

The first one is inching closer to done, and the outlines for the rest are coming together.

3. Have at least one novel published, with another one polished enough to publish in 2016.

I’m about done with one long one that’ll be bundled with a couple short stories. It’s on my list to complete before I start classes in late August.

5. Improve my marketing strategy in order to increase my fanbase (as measured by newsletter subscription, Facebook page likes, and social media interactions like comments, likes, and favorites), sales, and reviews.

I’ve been experimenting with different approaches, but so far none are working. I’ve used several Fiverr people to promote sales and giveaways, with varying degrees of relative success (downloads). Thunderclap was worthless. I’ve gotten more traffic to my website with my Media Monday and Friday Five features, but it hasn’t translated to sales. Most of the promotions seem to require money, which I don’t have. But I will soldier on.

I’m at 29, which is only 22 books behind schedule. Having the Kindle app on my phone is really nice, because I always have at least 200 books to choose from (yes, I’m that behind).

7. Get healthier: cut out my daily breakfast Pepsi (not sure how the lack of caffeine will work when I generally only get 4-5 hours of sleep) and eventually almost all soda; go out to eat once a week or less; eat more fruits and veggies and less processed, sodium-drenched foods; use the gym membership I’m paying for; ride my bike to work when it warms up; etc.

This goal is actually still working for me. I’m still drinking too much Pepsi, but my eating habits are way better; I eat almost exclusively fruits, veggies, and homecooked, non-processed foods. Actually it kinda sucks – I’ll stop for a fast food burger between work and class and then won’t even want to eat more than a few bites because it doesn’t taste very good anymore. I haven’t really lost any more weight, but on the plus side I haven’t gained any either. Baby steps.

Actually, I lied about non-processed foods. I’ve been taking a lot of trips and I manage to find Popeye’s on almost every one of them – the Philadelphia airport, detour through Milwaukee just to get Popeye’s, twice in Chicago Heights this past weekend…. But the closest one to my house is about 150 miles away, so it’s not like I do this every day. And to be fair, I kayaked a ton last weekend so I earned fried chicken.

Overall, I’m not doing great but I’m staying afloat. My life’s going to change a lot in the next month as I quit my job and go back to school full-time, but I’m hoping I’ll also have more time to write.

Actually, that’s a lie too. I’ll take on some other project and be even busier than I am now.

If you’ve set goals for yourself, how’re they going so far this year?