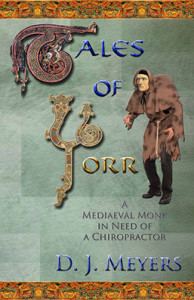 D J Meyers was born and raised in Melbourne, Australia. Writing began early on in the form of songs (music and lyrics) and in the past 10 years has developed into novels. The books, under the umbrella of The Gargoyle Chronicles, blend historic fiction, romance, humour and/or science fiction (often all four in one tale.)

The first release from The Gargoyle Chronicles is Tales of Yorr, inspired by the discovery of Richard III in a car park. D J, through his muse Yorrick, speculates on how history is written by the victor and how a disability does not necessarily hinder a life. Yorrick the hunchback discovers how rewarding a life can be by remaining true to himself, while always seeing the funny side of life. D J, much to the chagrin of those around, has a similar outlook on life.

1. Why do you write in the genre(s) you listed above?

I write in the genre that suits the tale in my head. If it is a history, then so be it; if it is a sci fi, then I lean that way. I don’t write for a genre, I write for the story and the characters in my head.

2. What was your attitude towards reading when you were a kid?

I ate books from the age of five, and continued on until I majored in English at university. These days I tend to write more than I read.

Diaphanous is a current fave – because it suited the book I wrote about Botticelli and the Birth of Venus so well… I had to word count it as I got a little carried away using it.

4. How much of your published writing is based on personal experiences?

I link people and places from my own experiences into everything I write. I even create historic characters based on people I know (or combinations of them).

5. What is the most important thing that people DON’T know about your subject/genre, that you think they need to know?

I do write a lot of histories, and while I will use the occasional archaic language, completely doing so would be a slog for a modern reader, so I keep the language more modern. This could be seen as being untrue to the time, but being too true would create a boring book.

Tales of Yorr (A Mediaeval Monk in need of a Chiropractor) can be found on Amazon.