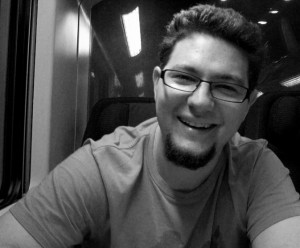 This week’s Friday Five focus is on Ashley Capes, author of poetry and epic and contemporary fantasy novellas and novels.

Ashley is a poet, novelist and teacher. He lives in Australia and loves haiku, volleyball and Studio Ghibli. He is firmly convinced that Magnum PI is one of the greatest TV shows ever made. His most recent novel is The Fairy Wren, a contemporary fantasy.

The Fairy Wren is a contemporary fantasy set in Australia, where Paul, a bookseller, struggles to juggle attention from a strange bird, a shady best friend, an Italian runaway and a missing ex-wife, all the while struggling to cling to a long-buried dream.

Today, I think my answer is The Wind-Up Bird Chronicle by Haruki Murakami because it’s longish, it’s the kind of book where I get a little more from each reading and it has a metaphysical/surreal element to match the mystery and domestic/realist aspects.

2. Why should people read YOUR stuff? Who’s your target audience and why?

I’d like readers to check out my stuff because I try and have fun with my stories – even though I’m not writing comedies. I think my audience is people who have open minds and who like to be surprised here and there.

3. What genre do you currently read most and why?

And I think it’s both because I’m writing those genres and because I get most enjoyment from them as a reader. I like to see what folks have already tried and how they tried it too. It’s inspiring.

Right now I’m working on another contemporary fantasy set in Australia. Crossings follows a wildlife ranger, Lisa, while she tries to unravel the mystery of a giant white kangaroo in a small town.

In the near future I’m hoping to release a ghost story set in Japan, and launch the second Bone Mask book, The Lost Mask, with the help of my publisher in New Zealand.

Everywhere! Wildflowers in a gutter, classic film, music, literature, advertising and TV – people on the street, in cafes, at work, wherever – but tiny fragments and impressions are always seeping into my mind and eventually, they congeal into a story.

Ashley’s latest novel The Fairy Wren is available through Amazon.