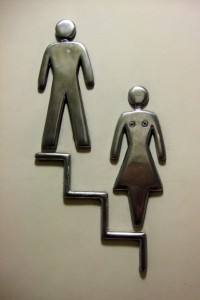 I take the stairs at work because I don’t like elevators. The stairs I use are enclosed, just two flights straight down. When I left at 6 pm today, someone entered the stairs a flight above me at the same time. My thoughts as I was walking:

And then I started brainstorming a story about a woman who attacks her attacker, only it’s a coworker, not an attacker, and awkwardness in the office ensues. But unfortunately I haven’t had time to write it at all tonight because I have a statistics final tomorrow that I need to study for because if I don’t get at least a 70% I don’t know if I’ll pass the class which is a prereq for the fun classes I’ll take later, like Correlation and Regression and Structural Equation Modeling.